Neeraj Chopra, the heartthrob of the nation, the winner of the only gold medal at the Tokyo Olympics in Javelin throw, on Tuesday visited the home of his former coach and Indian army subedar, Kashinath Naik in Koregaon Park area of Pune. Athletics Federation of India President Adille Sumariwalla had earlier issued a statement that Kashinath Naik had never trained Neeraj.

As Neeraj came to the house of Kashinath Naik and spent almost an hour with his family members, Naik had the last laugh.

Adille Sumariwalla had said he has never heard about Kashinath Naik and Neeraj Chopra, the Tokyo Javelin medallist has never trained under him.

What Does It Take To Win Gold In Olympics? Neeraj Chopra Has The Perfect Recipe

"Whatever we do, it is for the nation. I don't bother to comment or worry about allegations against me. I don't want the money either. (Karnataka government has announced Rs 10 lakh cash award to him for coaching Neeraj Chopra). Neeraj has asked me to be calm," Kashinath explained to IANS.

"I was hesitant to invite Neeraj home as now he has become a celebrity. Neeraj only came forward to say that he would visit my house. I felt so happy. He has not changed a bit. He addressed my wife as 'bhabhi' as he would call her earlier," Kashinath Naik told IANS. 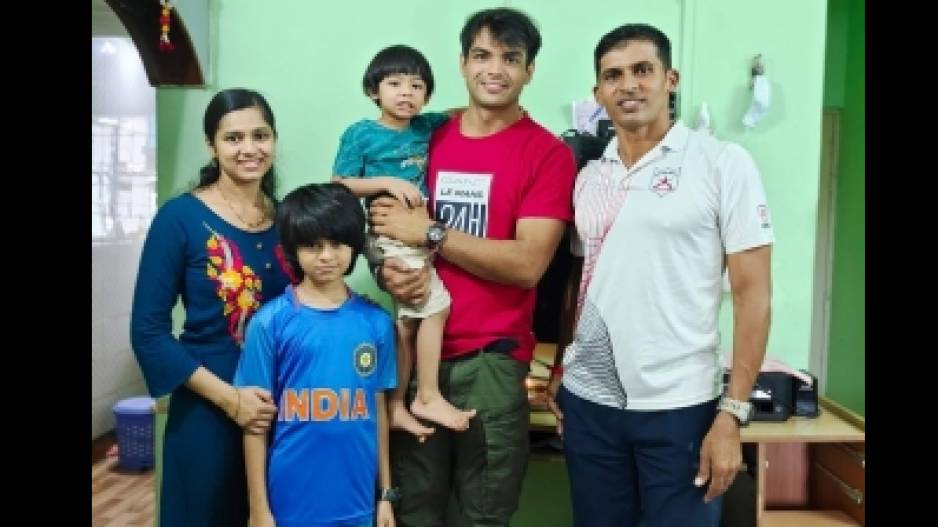 Neeraj Chopra was in Pune to attend the inaugural function of a sports track named after him. Due to technical reasons, the function was postponed to August 27. "He came home at around 1 p.m. on Tuesday and stayed till 2 p.m. Though we tried to keep it a low key affair, neighbours recognized him and surrounded him for selfies and photos. Neeraj calmly and happily fulfilled their requests," he stated.

Chaitra, who welcomed Neeraj, shared that she was speechless to see a national star at her residence. "I can't describe my happiness. He became a little boy with my children. I had cooked Paneer Paratha for him. He ate sweets and drank coffee later," she informed.

Kashinath Naik explained that Neeraj liked Pune Kulfies and he had got them parcelled.

Despite being inundated with praises, after winning the only gold medal for the country, Neeraj had called up Kashinath Naik from Tokyo. Naik, a subedar in the army, had trained Javelin thrower Neeraj Chopra between 2015 and 2017.