A study of State budgets since 2009-10 shows that Odisha has already spent/earmarked a whopping over Rs 888 cr, including the allocation of Rs 87.76 cr in the 2021-22 budget for publicity. The analysis further reveals that publicity spending posted a spike whenever elections were round the corner

Can ‘one family one ticket’ get Odisha Congress out of labyrinth, experts opine otherwise

82 Zilla Parishad members in Odisha have criminal cases against them

Chief Minister Naveen Patnaik seems to have taken the words of Bill Bernbach seriously. The advertising pioneer had once said, "Nobody counts the ads you run; they just remember the impression you make."

Significantly, the spending on publicity during CM Patnaik's third and fourth tenure has pole-vaulted to a new high. The revenue spending on information and publicity at the beginning of his second term (after the 2009 elections) was a mere Rs 27.31 cr., but the same spending in the year 2019-20 (after the 2019 general elections) had posted a high jump to over Rs 89.86 cr.

Despite the big political divorce (breakdown of BJD-BJP alliance) before the 2009 elections, the total publicity spending (from the consolidated fund of Odisha) by the Naveen-led government was a paltry Rs 16.87cr.

The spending earmarked for publicity from the consolidated fund of Odisha (known as public exchequer as it is a fund generated from taxes paid by the public) in the election year of 2014 was Rs 53.37cr.

Now contrast it. It seems the BJD government has borrowed the words of well known British Actor Sean Lock. Lock had once said, "I am the master at publicity."

In the election year 2019, the spending on publicity, which is well known as election advertising,  posted a tidal leap to touch a massive Rs 269.13 cr.

As per a recent SBI study on 'Role of Publicity in Elections',  among the 10 states that went to polls since 2019, the spending on publicity by the Naveen-led Odisha government has posted the second-highest spike after the Arvind Kejriwal-led Delhi.

As per the report, since the year 2019, a total of 10-states have witnessed elections. The publicity spending by the respective ruling parties during the pre-poll, poll and post-poll years were analysed. The analysis reveals big.

While Kejriwal-led Delhi government with a 493 per cent hike in publicity spending in the election year topped the states, Naveen Patnaik-led Odisha government hiked the same by 249 per cent to finish second.

And the SBI report has observed that both the government got re-elected. The report finds that states with low or nil spending failed to get re-elected.

For instance, the report observed that Chandrababu Naidu-led Andhra Pradesh government's publicity budget saw a slash, in the election year and the incumbent govt lost the elections. Similar has been the fate of  Raghubar Das led BJP govt in Jharkhand and EK Palaniswami-led AIADMK govt in Tamil Nadu. (see the box given below). 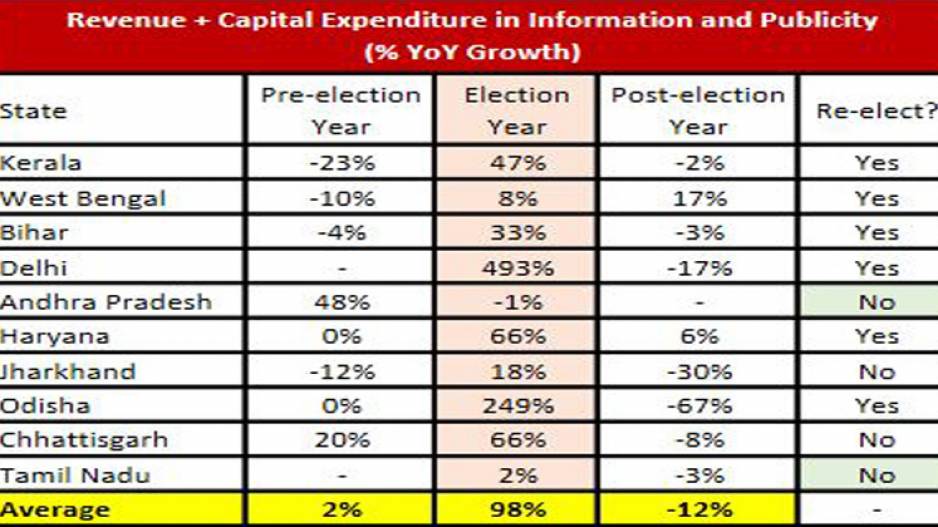 A study of the State budgets since 2009-10 shows that Odisha has already spent/earmarked a whopping over Rs 888 cr, including the allocation of Rs 87.76 cr in the 2021-22 budget. The analysis further reveals that publicity spending of the government posted a spike whenever election were round the corner.

For instance,  the State had Panchayat polls in 2017. And the publicity spending earmarked in the 2016-17 budget was Rs 53.33 cr. But in the 2016-17 revised estimates, the expenditure on publicity was put higher at Rs 81.20 cr. Incidentally, that year Odisha saw Panchayat polls and the ruling BJD had gone on an ad spree- from print, electronic media to outdoor ads (hoardings).

As per highly placed sources, the allocation of Rs 87.76 cr in 2021-22 will shoot up much higher when the revised estimates will be tabled in the next year budget. Because, the Panchayat polls are scheduled to be held in 2022. And the election advertising has now started streaming live in the State.