The recent DoPT letter to the secretaries of all central govt departments is being seen as a beacon of light for thousands of Central government job aspirants in the country. The recruitment year 2021-22 will see the announcement of nearly 2 lakh vacancies, including UPSC recruitments

With the pandemic shadow looming large over employment generation in the country, including Odisha, recently (on June 3), the department of personnel training (DoPT) of the Union Government had sent a letter to the secretaries of all departments under the Union of India to fill with the vacant posts at the earliest and in a time-bound manner.

As per the data available with DoPT, the vacancies in Central government departments have risen by nearly 2 lakh between March 2019 and March 2020. The urgency of the letter assumes significance, as there is a norm in the Central government departments that if a vacancy is not filled within 2-years, the said vacant post stands abolished. However, this norm is not applicable to railways.

The DoPT letter (read the excerpt given below) is being seen as a beacon of light by thousands of Central government job aspirants in the country. 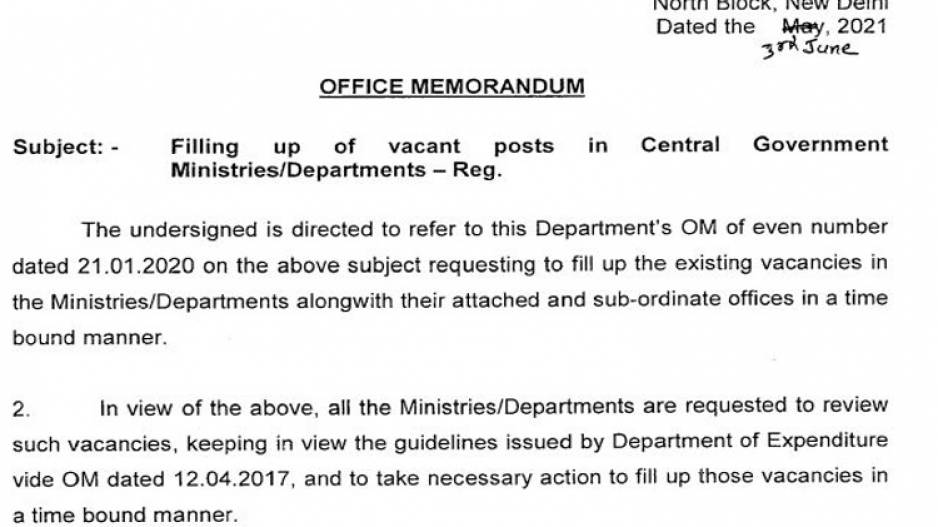 According to the data available, the vacant posts at various levels in Central government departments stood at a whopping 8.72 lakh. The railways alone have vacancies to the tune of nearly 3 lakh.

Railways alone will go for recruitment of nearly 1.5 lakh vacancies.

As per the data available with the State Finance department, the Odisha government departments at present are saddling with a massive 1.2 lakh vacancies. A comparative analysis of the recruitments undertaken by the State during the period of 2015-20 revealed that Odisha Government had recruited for around 20,000 posts only.

As per sources, large-scale vacancies exist in the departments of education, health, water resources, home (police) etc. Recently, the Orissa HC has expressed displeasure over the Odisha government's policy to recruit retired teachers.