Tajinder Bagga has injuries on back and shoulders: Medical report

Bagga has alleged that he sustained the injuries after he was assaulted by the Punjab Police.

India, Sri Lanka to issue stamps on democracy to mark 75 years of Independence

A medical leave certificate of BJP leader Tajinder Pal Singh Bagga, who was freed following his arrest, revealed that he suffered multiple injuries on his back and shoulder, according to documents accessed by IANS.

Bagga has alleged that he sustained the injuries after he was assaulted by the Punjab Police.

Fire breaks out at LIC office in Mumbai's Vile Parle; no casualty reported

Madhya Pradesh: 5 dead, 11 injured as fire breaks out in building in Indore

There are now possibilities that a third complaint might be lodged against the Punjab Police by the BJP leader.

Bagga, was produced before Metropolitan Magistrate Swayam Siddha Tripathi, who has now directed the SHO Janakpuri to ensure Bagga's safety and security.

According to R.K. Rathore, the Punjab Police, counsel, Bagga through his counsel had moved the Dwarka Court.

The plea stated that he was missing or taken by unknown persons.

The Dwarka Court passed an order of his production. After this, the Delhi Police swung into action and informed Haryana Police about Bagga.

The Punjab Police was then stopped and Bagga was freed. Since the Metropolitan Magistrate passed this order, Bagga was produced before Tripathi.

Now the Dwarka Court has noted in its order that Bagga has apprehended of a similar incident that can happen to him in near future and hence SHO Janakpuri should provide him full security.

"SHO is directed to make necessary arrangements for the safety and security of the complainant (Bagga), he is a major and requesting that he should be allowed to go home, since he is major there is no requirement of any further order with respect to his stay," the court noted in its order accessed by IANS. 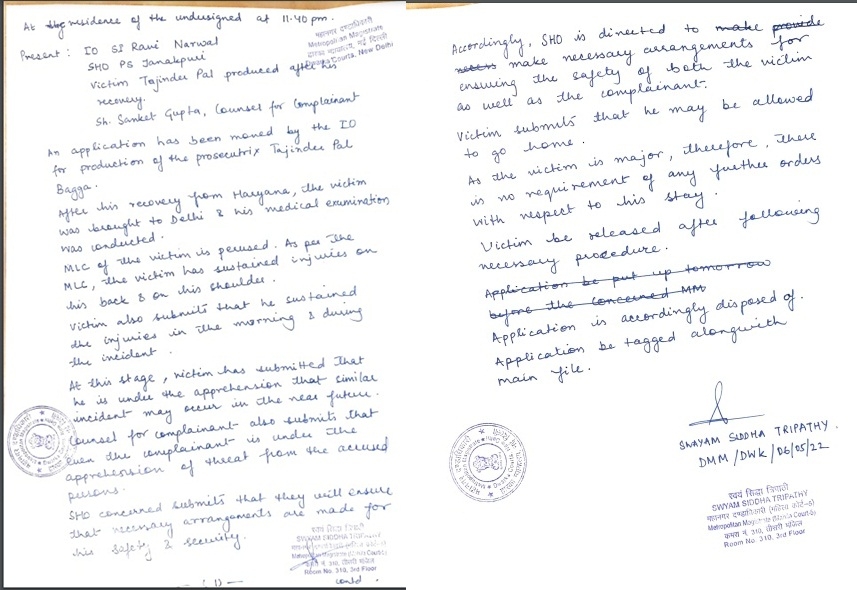