On entering this village, comprising 50 homes, mostly belonging to marginalised tribal and Dalit families, one encounters a cement plaque displaying the words -- "Villagers protect and manage these forest resources".

In January 2020, a few villagers in Mitukuli village in Odisha's Nayagarh, were patrolling the forests -- a practise popularly known as thengapalli -- when they found nearly 225 well-grown trees cut down by the forest department. Infuriated at the sight, they put forth the issue before the Community Forest Resources Management Committee (CFRMC) (Gosthi Jangala Sambala O. Parichalana Committee), formed by the villagers.

This kickstarted the process to formally reclaim the forest lands that they have been protecting for generations, and legally petition for the ownership of Community Forest Resources (CFR) under the Forest Rights Act, 2006. Believing that this will empower them with rights for protection, regeneration, conservation and management of forest resources, the inhabitants of eight villages (including Mitukuli) in the Dasapalla block in the district met with the Welfare Extension Officer (WEO) On August 16 to submit the petition.

Last January, the day after the villages found the fallen trees, they noticed officials from the Forest Department, Forest Development Corporation and a few labourers bringing in a truck to remove the trees. The villagers protested the entry of the vehicle. "We didn't allow them to lift the wood; we sat on the timber. We protested because after all, we are protecting our forest but without informing us, they cut down our trees," Pramila Jani, a committee member, told 101Reporters.

Initially, the department didn't agree and tried to forcibly take away the timber. But the villagers were firm in their refusal to move. To diffuse the situation, the District Forest Officer, Ranger and other officials agreed to a negotiation. 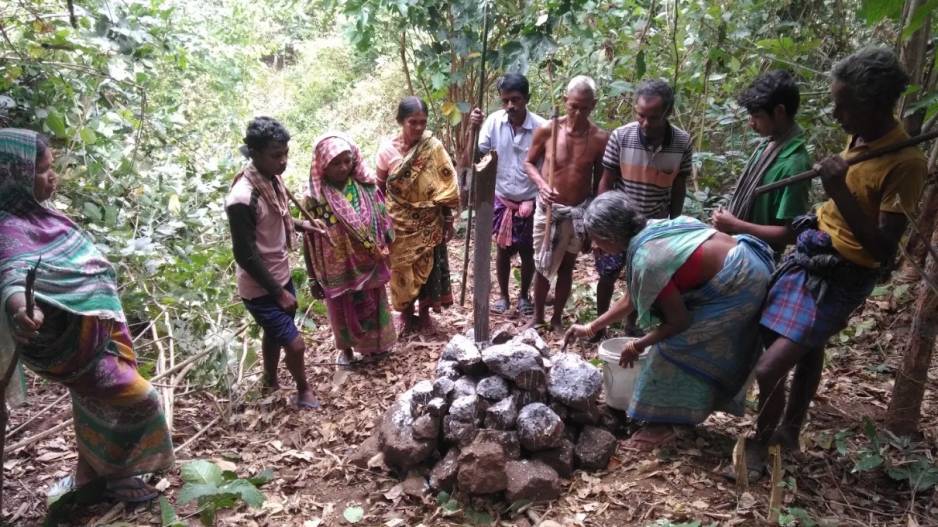 Villagers Claiming Their Rights Over Their Forest

"We demanded our share of the timber and asked them to not cut any more trees without taking permission from the committee," said Subhas Chandra Jani, President of the CFRMC. Finally, the forest department decided on a compromise and assured to pay the villagers Rs 87,700 against the trees they had cut down. The amount is yet to be transferred to the CFRMC account, but villagers are happy to have claimed their share for the first time. This incident built confidence among the villagers, and they decided to redraw the traditional forest boundaries to claim control over their entire CFR area.

"Our ancestors have been protecting this forest, and now we continue their legacy. If we establish the boundary, it will empower us to restrict the entry of outsiders," Dhaneswar Jani, an active member of Mitukuli CFRMC and representative of the Adivasi Cell in Nayagarh district, told 101Reporters. This already includes timber thieves and smugglers, against whom women like Mallick protect their forests, stick in hand. "But many times the Department itself cuts down and takes away timber in the name of making rath for Lord Jagannath, cutting down siali creepers just to clean the forest and plant trees which benefit them. They never thought to consult us or take our permission," said Mallick.

Ironically, it's the villagers who had to worry about being arbitrarily pulled up by forest guards for venturing into the forest.

The community sat together to redraw the traditional boundary line so they can use the resources and impose restrictions. They also invited neighbouring villagers, the Revenue Inspector and officials from the forest department for joint verification and to avoid any conflict in future.

"We have considered the cattle grazing land, barren land, streams, types of trees, forest deity and places our ancestors used to visit while preparing the outline of the traditional forest area," said Bhubaneswar Jani, Secretary of the Mitukuli CFRMC. He added that once they finished the blueprint, each family contributed to buying lime powder to mark the boundaries.

"Before beginning this divine effort, we performed a puja before our village deity and ventured into the jungle. Since then, we have been awaiting the official claim certificate over CFR," the secretary said with a confident smile.

Bankataila is one of the seven other neighbouring villages that was inspired by Mitukuli to petition for rights over CFR. With a population of 160, Bankataila began as a satellite village and was sharing forest land with the neighbouring village of Munduli. Laxmidhara Muduli, President of CFRMC, Bankataila, said, "When we heard Munduli were demarcating their forest area, we found they had taken away most of our forest land." But the villagers from both the villages were able to sit down together and amicably redraw the forest borders.

"Ame kaani pati bhikhya magilu, ama jangala amaku diya (We begged and requested them to give us our forest land to survive). This touched the hearts of the village elders, and they returned the portion of the land to Bankataila," he said.

In Mitukuli, the villagers barely have about two acres of cultivable land on average where they generally grow paddy. To supplement their income and nutrition, they collect sal, siali and tendu leaves, mushroom, fruits, jhuna, honey, mahul, palua, satabari and odanga from the forest. It is estimated that each family makes at least Rs 10,000-15,000 from forest produce yearly which can be substantially augmented if they have stronger rights over these resources.

Dhaneswar told 101Reporters, "In 1999 and 2000 when we faced drought-like conditions, our forest saved us from starvation. Women ventured into the forest to collect siali leaves and stitch them, while men sold these in the market to buy rice for their families. Besides tubers, different types of spinach, potatoes and mushrooms helped us survive." This year too, they expect the sporadic rainfall to produce a below-average yield. "But we are hopeful that our forest will help us," he said.

Though these eight villages in Dasapalla are waiting for recognition of CFR, they have already started following the rules formed by their respective committees. Each committee has 15 members with equal participation of women. If villagers require timber or bamboo for the construction of homes or any other purposes, they will have to obtain permission from the committee.

"The committee will decide on which trees can be cut and the villager will have to pay for it," said Sukanti Behera, secretary of the Bankataila CFRMC, showing the receipt book. Till now, the Committee has received Rs 1,800 from villagers. "But the food from the forest has been exempted and we don't charge for it," she added.

The Bankataila CFRMC hopes to be able to spend the funds collected on the development of the village and community. "We have planned to start a seed bank to collect seeds from the forest. Before the monsoons, we will plant them for the growth and regeneration of the forest," said Nandi Bhoi, a member.

If the eight villages fail to get the CFR title in the next three months, they will bring this issue before the Collector. Dhaneswar Jani echoed their common belief, "After all, we are protecting our forests, so we rightfully deserve ownership over forest resources."