Gochikar presented Kovind a dedicated Tamra Falak (copper plate). Following the darshan at Srimandir, a special Patachitra was presented to Kovind by the temple administration. He remained for around 40 minutes in Srimandir.

Watch: Amit Shah At Birthplace Of Netaji Bose In Cuttack

Odisha tribals take fight against malnutrition to their backyards

President Ram Nath Kovind, who is on a two-day visit to Puri with his family, was overjoyed following the darshan of the Holy Trinity (Lord Jagannath and his siblings) at Srimandir in Puri on Saturday.

As per reports, the carcade of the First Citizen reached near 'Badadanda' from the Governor House in the afternoon today under high-security cordon. The President was ushered into the shrine through the 22 pahacha (steps) by Shri Jagannath Temple Administration (SJTA) chief administrator and family priest/servitor (Kul Purohit). He entered the temple through Singhadwar (Lion's Gate) after offering prayers at the Aruna Stambha.

As informed by their family priest, Kovind and his family went inside the sanctum sanctorum (Garvagriha) and offered prayers to the trinity after darshan. The family then went to Mukti Mandap through Beharana Dwara to seek the blessings of the pundits. Kovind along with this family also visited Maa Bimala temple and Maa Mahalaxmi temple in the Srimandir premises, wherein, he lit earthen lamps and sought blessings from the deities.

Then, the First family viewed the Nilachakra (Blue wheel) from Kirtan Chakada and observed the sight of changing Patitapaban Bana (flag) and sought blessings from the Lord of the Universe.

"I showed him the fingerprints of Chaitanya Mahaprabhu who comes every day for darshan of the Almighty. The President was elated on seeing the fingerprints. He and his family entered the Garvagriha and offered prayers to the Holy Trinity. He witnessed the divine ritual of changing of the Patipabana Bana during his parikrama (walk) of the temple premises," said Narayana Gochikar, family priest of the President.

Gochikar presented Kovind a dedicated Tamra Falak (copper plate). Following the darshan at Srimandir, a special Patachitra was presented to Kovind by the temple administration. He remained for around 40 minutes in Srimandir. 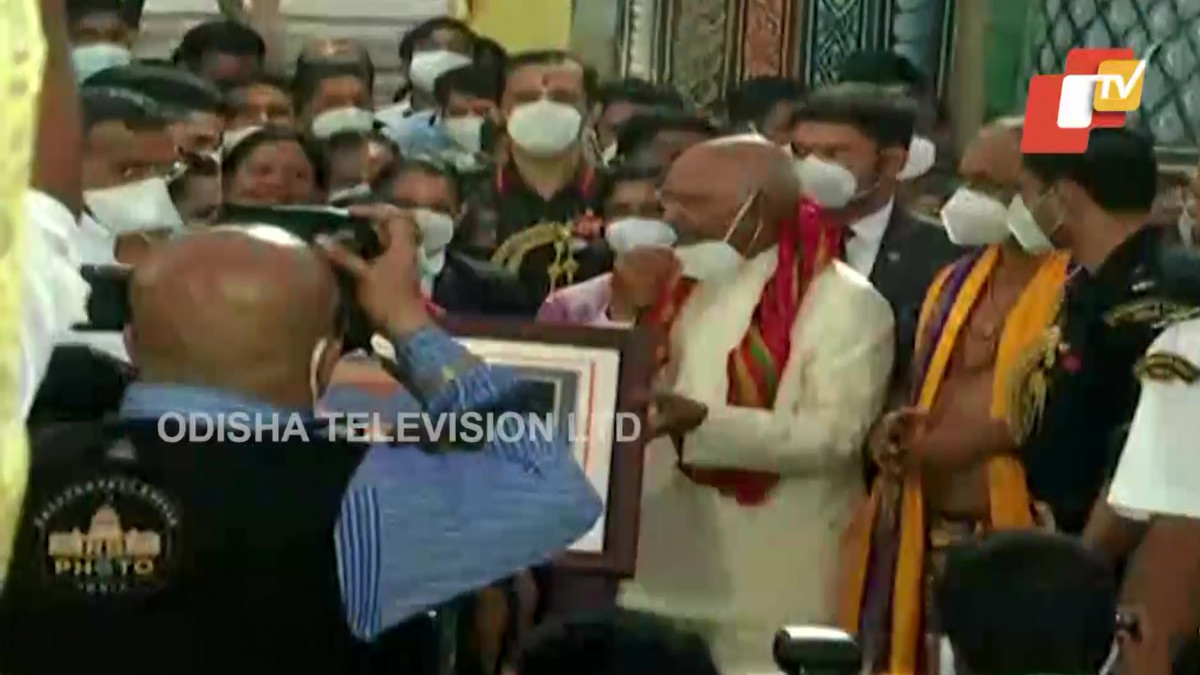 "We had made proper arrangements for the President and his family. They were escorted by their family priest and took darshan of the Holy Trinity. He was lucky enough to catch the divine view of changing of Patitapabana Bana (flag) under his name, while he was doing the parikrama," said Krishan Kumar, STJA Chief Administrator.

In view of the President's visit, the other devotees were restricted from entering the Srimandir from between 4pm to 6pm. Gajapati Maharaj Dibyasingha Deb couldn't welcome Kovind and his family as he tested Covid positive on Friday.

As President, this was Kovind's third visit to Srimandir. He had earlier been to Srikshetra in 2018 and 2021.