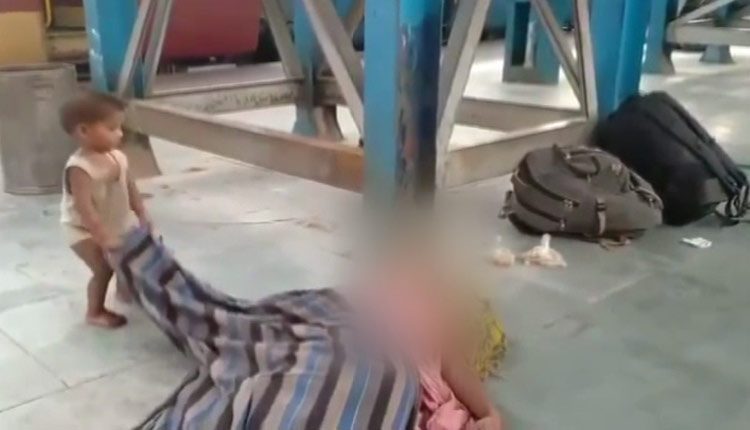 Muzaffarpur: A toddler’s vain attempt to wake up his dead mother from eternal sleep on a railway platform in Bihar’s Muzaffarpur on Wednesday presented the most poignant picture of the massive migrant tragedy unfolding across several states.

A video tweeted by Sanjay Yadav, an aide to RJD leader Tejashwi Yadav, shows the child walking unsteadily up to his mother’s body, tugging at the blanket placed over her, and when failing to wake her up, covering his own head with it.

As the mother still lay still, he wobbles away from her, announcements continuing in the background about the arrival and departure of trains that would bring in tens of thousands of people in a rush to get away from hunger and hardship they face in large cities that could sustain them no more.

“This small child doesn’t know that the bedsheet with which he is playing is the shroud of his mother who has gone into eternal sleep. This mother died of hunger and thirst after being on a train for four days. Who is responsible for these deaths on trains? Shouldn’t the opposition ask uncomfortable questions?” tweeted Yadav.

However, the police had a different story to tell.

Ramakant Upadhyay, the Dy SP of the Government Railway Police in Muzaffarpur, said the incident occurred on May 25 when the migrant woman was on way to Muzaffarpur from Ahmedabad by a Shramik Special train.

He told reporters the woman, who was accompanied by her sister and brother-in-law, had died on the Madhubani bound train.

“My sister-in-law died suddenly on the train. We did not face any problem getting food or water,” the officer said, quoting the deceased’s brother-in-law who he did not name.

He said on getting information, police brought down the body and sent it for postmortem.

Citing the brother-in-law of the deceased, Upadhyay said she was aged 35 years and was undergoing treatment for “some disease” for the last one year in Ahmedabad. “She was also mentally unstable,” he said.

When persistently queried about the cause of death, he said,”Only doctors can tell”.

A massive exodus of migrant workers is on in several parts of the country, unprecedented in magnitude since Partition.

The humanitarian crisis still unfolding on highways and railway platforms have shone a light on disturbing tales of entire families walking hundreds of kilometres with little children on foot in a seemingly endless march to escape hunger.

People have been found travelling on trucks and in the hollow of concrete mixing plants, and in many cases, dying from hunger and exhaustion before reaching their destinations.

Later, Indian Railways spokesperson clarified through a tweet that ‘the woman who was found dead at Bihar’s Muzaffarpur station had existing illness as confirmed by family members; the woman boarded the train on May 23 from Ahmadabad to Katihar & died on May 25 after which her body was de-trained by family at Muzaffarpur.’