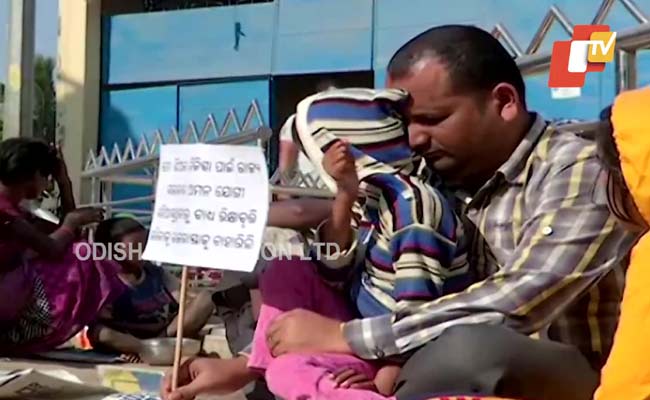 Balasore: After spending around Rs 34 lakh, a man in Balasore district is running from pillar to post to arrange funds for the treatment of his five-year-old daughter who is suffering from multiple ailments.

Prakash Patra of Padampur village in Sadar block has turned to begging outside Jhadeswar temple in the district after failing to arrange money for his daughter’s treatment.

Patra’s daughter Gayatri is suffering from multiple ailments along with abnormal growth of her head. He had first admitted her to SCB Medical College and Hospital and later to AIIMS, Bhubaneswar.

Patra had to sell all his property to arrange funds for Gayatri’s treatment at AIIMS, New Delhi. Though the condition of Gayatri had improved, her condition deteriorated again due to lack of treatment.

The family is now racing against time to ensure proper treatment for Gayatri.

“The doctors had advised six tests but we could do only two due to dearth of funds. Surgery of my daughter’s head can be done only after submission of reports of all the six tests. She can at least play and study like other girls of her age after the surgery,” said Patra.

Patra’s wife Padmabati said, “We could not conduct the tests as we were even unable to arrange money for our stay in New Delhi.”

Though some people have donated money for Gayatri’s treatment, it’s not enough. Assistance from the government can only change the fate of the girl, said a local.

“The family has undergone a lot of pain to cure their child. They sold their land and even now, trying their best. We hope that the government will extend help and give a new lease of life to the girl,” said Ranjan Pati, a local resident.

Balasore Additional District Magistrate, Sambit Nayak informed that an assistance of Rs 10,000 was provided from the Red Cross fund for the girl’s treatment.

“The family can directly apply to Chief Minister Relief Fund or through district Collector for assistance,” said Nayak.

Ab Tak 60 countries! Will COVID-19 change fate of the world?