Tough days lie ahead for the Naveen Patnaik-led BJD government in Odisha. With hardly a week left for the winter session of the State Assembly, and when the Opposition together is hell-bent on cornering the ruling party over the Mamita Meher murder case, the Niti Ayaog has dropped a bombshell.

In its Urban Development SDG Index, 2021-22 released on Tuesday, the country's apex think tank report has ripped apart the dark underbelly of the State Capital. Not only the Odisha Capital city of Bhubaneswar has finished 44th, among 56 cities chosen for the urban development ranking, but has also been listed as the 7th city with a high crime rate against women.

The State Capital's poor show in containing sexual violence or crime against women tells a larger tale about the prevalence of women crime at the district and village levels in Odisha.

No rosy show by the State Capital, rather the City seems to be in red. As per the Index, the rate of sexual crime against girl children per one lakh girl children population is high at 54.92. Moreover, in the indicator of the rate of crime against women per lakh female population, the State Capital is perched at the 7th worst spot with a rate of 170.6 - nearly 171 women per lakh in Odisha Capital had experienced one or the other form of sexual violence. 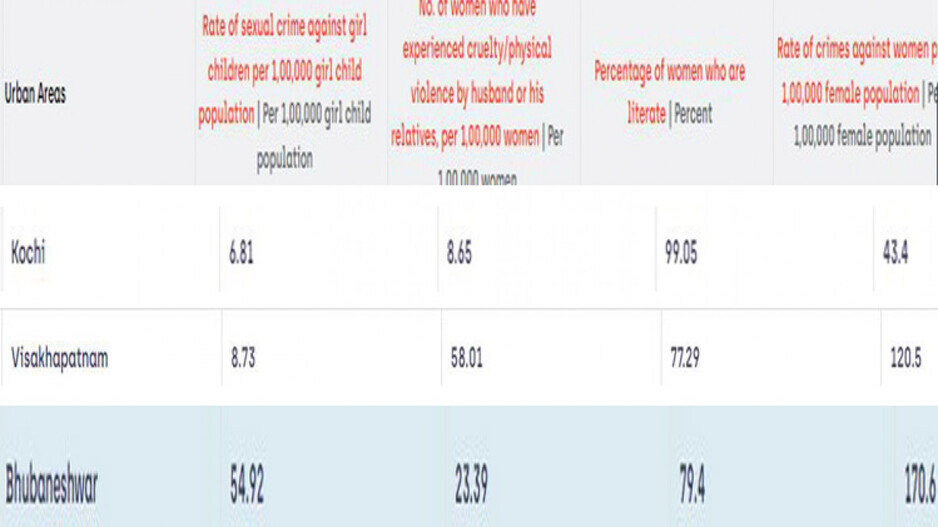 As per NCRB 2020, the crime rate against women for the whole of Odisha in 113 per lakh, which shows State Capital rate of crime is higher than the State average.

Significantly, the female literacy rate in Bhubaneswar is a notch (79%) higher than Vizag (77%)

The salient point here is the population of Odisha Capital in 2021, as per census projections, is 11.94 lakh. In contrast, the projected population of Visakhapatnam is a massive 22.26 lakh. Despite the higher population, the rate of crime is way below that of Bhubaneswar, which tells the real story.

A very interesting pointer here is when it comes to cruelty against women, Bhubaneswar scores far better than Vizag. In the indicator of the number of women who have faced cruelty/physical violence by husband or relatives per lakh women, the number for Bhubaneswar is a mere 23.39 vis-a-vis 58 in Visakhapatnam.

The key takeaway here is women in Bhubaneswar are perilously vulnerable to physical or sexual violence from persons outside the known circle. And the crux called Law and Order fits into the scheme of governance.

Kochi, the port city of Kerala, has a projected population of 31.9 lakh. But the rate of crime against women is mere 43.4 per lakh female population. The rate of sexual crime against girl children is 6.81 per lakh girl children. The domestic violence rate is 8.65 per lakh women, and the female literacy rate is 99.05 percent. Niti Aayog awarded the city the highest score of 97 from 100.

Kochi, like Bhubaneswar, has implemented the commissionerate system of police in 1966 to enforce a better grip on the growing crimes - from against women to organised gangs.