Only 47% Fully Vaccinated In Odisha Vs 52% In Assam, State Lags Behind Chhattisgarh

An analysis reveals that Odisha has very fewer vaccination sites to inoculate its eligible population. Chhattisgarh and Assam have opened 4,300 and 3,489 vaccination sites, respectively, against a mere 2,194 in Odisha

Notwithstanding the hype and hoopla, the time is ripe for Odisha to inject a shot to its vaccination drive to attain the required pace. The State failed to shoot itself into the list of top-10 fully vaccinated states in the country. The lower count of vaccination sites is proving a drag in the State.

As per a SBI research report released today, Himachal Pradesh tops the country by virtue of fully vaccinating 82 percent of the eligible population. Gujarat comes second with a count of 66 percent fully immunized. Assam and Chhattisgarh have left Odisha behind to take the honour of breaking into the top-10. While 46 percent in Assam are fully inoculated, the number in Chhattisgarh stood at 45 percent. Only 44 percent of Odisha's eligible population stood fully vaccinated.

As many as 7 states in the country have delivered the full dose shots to over half of its eligible adult population. The list table is given below (see the image below). 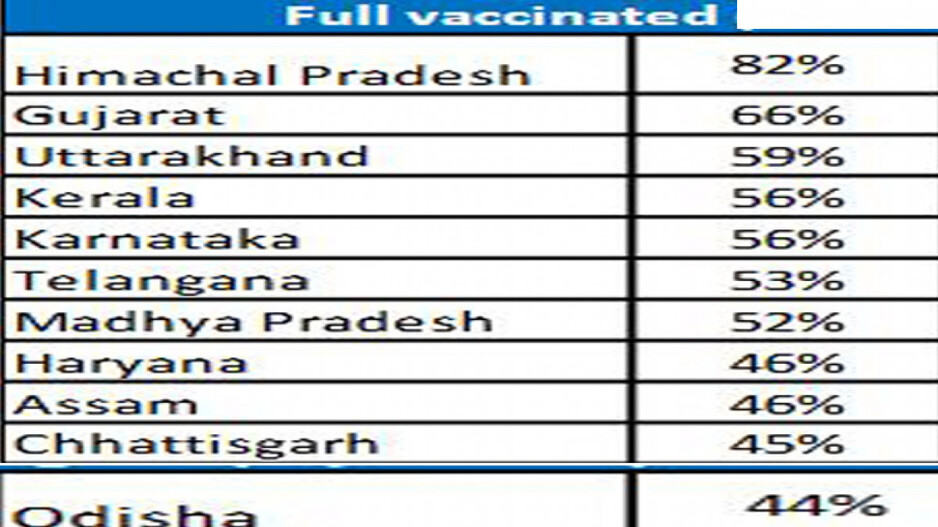 SBI Report
The honour list shows states like Gujarat, MP and Karnataka despite having more eligible populations than Odisha, have been vaccinating their populace at a faster rate.

According to the preliminary target set in April, the vaccine eligible population of over 18+ in Odisha had been set at 3.09 crore. The count for MP then was 5.49 cr, Gujarat (4.93cr) and Karnataka (4.9cr), respectively.

The numbers as of today are given below.

The second shot graph in the states is given below.

A comparative analysis reveals the following. (as of date)

Odisha Vs Assam And Chhattisgarh

Population Fully Vaccinated In The States

The comparative data analysis reveals that the rate of vaccination in Odisha is moving slowly. States like Assam and Chhattisgarh (especially second dose) have a higher immunisation rate than Odisha, not to speak about Gujarat, MP and Karnataka.

Why Odisha Lags Behind?

The analysis reveals that Odisha has very fewer vaccination sites to inoculate its eligible population. Take the instance of Chhattisgarh and Assam.

When the eligible population in neighbouring Chhattisgarh and north-east Assam has been lower than Odisha, the vaccination sites the states have opened stood at 4,300 and 3,489, respectively, against a mere 2,194 in Odisha.

The data with the Odisha Health Department shows that even after the passage of 84-102 days gap for the Covishield vax second dose, nearly 11 percent of healthcare and frontline workers are yet to take the 2nd dose.

Among the districts, the coverage of the second dose among healthcare and frontline workers is poorest in Bargarh and Sundargarh.