Studies show the scale of tilt in the elections is decided by the B-factor, which means the number of beneficiaries who have availed of the scheme on a real-term basis

'Anna' Factor Will Be The Decider In Odisha

The Panchayat polls have entered the slog overs in Odisha. Political parties of all hues have upped their footwork to score a brisk strike rate. Door to door campaigning mode is dominating the pollscape as the State Election Commission has banned large gatherings and rallies due to the looming pandemic threat.

Overanxious for vote-catching, the ruling BJD is banking on the S-factor (the schemes) rolled out by the party ahead of the crucial polls. However, studies show the scale of tilt in the elections is determined by the B-factor (number of beneficiaries who have availed the scheme on a real-term basis).

As the political contenders bank on the S-factor, layers galore in the schemes of both Modi-led BJP government at Centre and Naveen Patnaik led BJD government in the State. The large layers of beneficiaries will be the decider in the rural poll outcomes this year.

Take a glance at a study titled 'Did Welfare Schemes Make a Difference in 2019 elections'?

The National Election Studies (NES) of 2019 by Lokniti and CSDS (Centre for the Study of Developing Societies) had inferred the emerging physics of the elections.

Take a look at the tables given below. 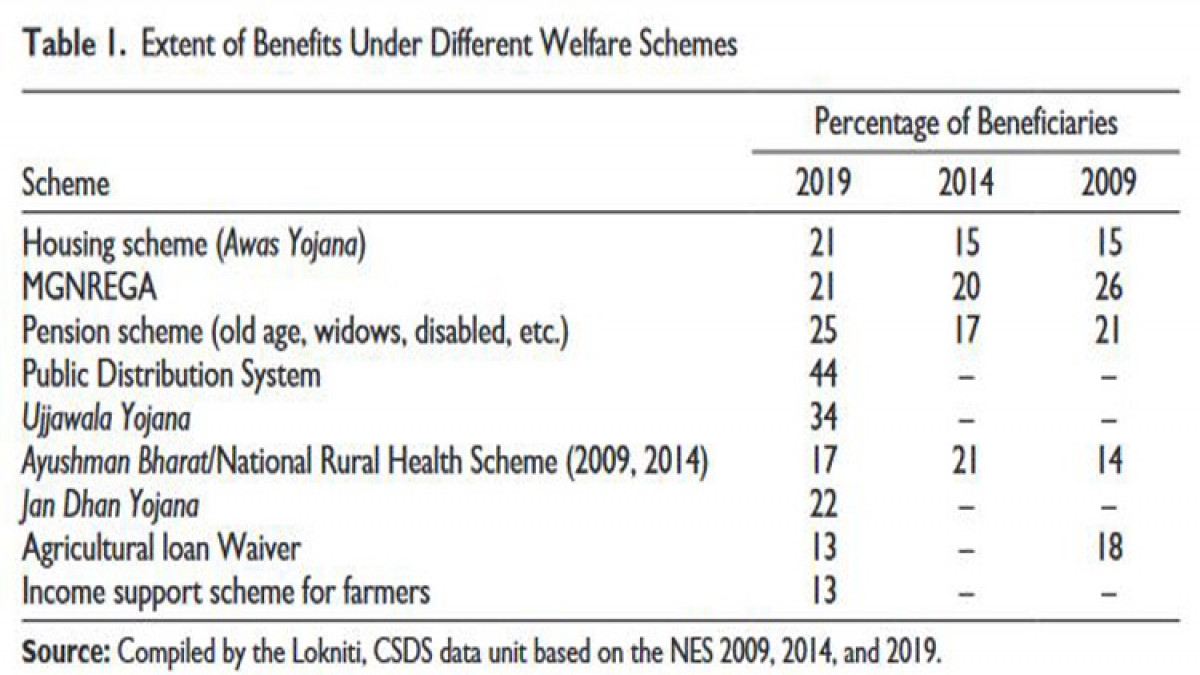 As per the data given in table 1, Public Distribution Schemes(PDS) carry the largest chunk of beneficiaries. And is followed by Ujjwala Yojana and Awas Yojana.

In the backdrop of the above study, given that the whole country, including rural Odisha, has been facing the debilitating impacts of the Covid-19 pandemic, and as the PDS carries the largest chunk of voters, the PM Garib Anna Yojana or the Anna factor may play a major role in the 2022 Panchayat polls in the State.

PM Garib Kalyan Anna Yojana: In order to cater to the needs of migrant workers and poor households, the Centre has announced this programme since April 2020. To date, a total of five phases have been launched in the State.

Under the scheme, in addition to 35kg rice under the NFSA at Re 1/kilo, beneficiaries may avail 5kg/person free. And along with rice, 1 Kg Pulse is supplied free of cost to the beneficiaries.

As per the data available in the Union Food Ministry, the scheme beneficiaries have increased over the phases in the State.

The above data shows PMGKAY beneficiaries in Odisha have grown. This shows its success.

Similarly, the next in line, as per the 2019 NES, has been Ujjwala and Awas Yojanas.

Ujjwala: As per Union Petroleum Ministry data, a whopping 83.66 lakh have availed refill under the Centre's flagship scheme.

Awas Yojana: Since 2014, as per the data available with Union Rural Development Ministry, a total of 10.35 lakh beneficiaries have availed a Pucca house in the State.

Jan Dhan Yojana: As per the 2019 NES, PMJDY has the fourth-largest beneficiaries after PDS, Ujjwala and Pension schemes.

Significantly, during Covid-19, the Centre has transferred Rs 500 to 81.21 lakh PMJDY accounts in Odisha.

Pension Schemes: While as per the Odisha Assembly data, total beneficiaries under State's own pension schemes stood at 48 lakh, around 20.3 lakh in Odisha have benefitted from the Central government's National Social Assistance Programme.

However, as per data laid in Odisha Assembly last year, a total of 36.5 lakh beneficiaries have availed the benefit under the KALIA scheme.

Taking into account the determinants of the NES results, PM Garib Kalyan Anna Yojana will don the vote-catching mantle in the elections, and all other welfare schemes will play the top-up role. The election results will only tell which party has benefitted from the scheme.