While ECMWF and IMD models agree on Odisha taking a hit by at least a  depression that will bring very heavy rainfall of 70mm/24hrs, the NCEP-GFS sees it as an extremely severe cyclonic storm. Very Heavy Rains In Andhra Pradesh on Oct 16

Even as the IMD's tropical cyclone forecast wing, Regional Specialised Meteorological Centre, in today's bulletin maintains that a low pressure area will form over north Andaman sea on around October 10, the country's top weather agency's global forecast model on the other hand predicts the formation of a low pressure area over the central Bay of Bengal on around Oct 14.

Another top ocean forecasting agency of the Government of India, INCOIS (Indian National Centre for Ocean Information Services) in its latest state of the forecast for Bay of Bengal predict the formation of a cyclonic circulation over the central bay on around Oct 14.

Both IMD and INCOIS models don't see any low pressure area around Andaman seas in next 48 hours. (see both the images below) 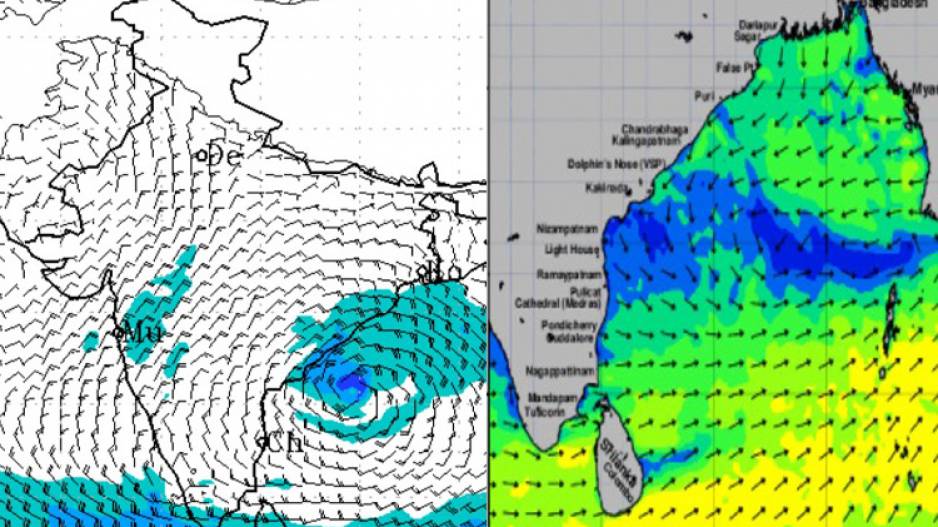 As per the conditions prevailing at morning hours (5:30 am) today, a low pressure trough line from Arabian sea is extending up to south 24 Parganas in West Bengal, after passing through south Maharashtra, parts of MP-Chhattisgarh and Odisha. (see the image) 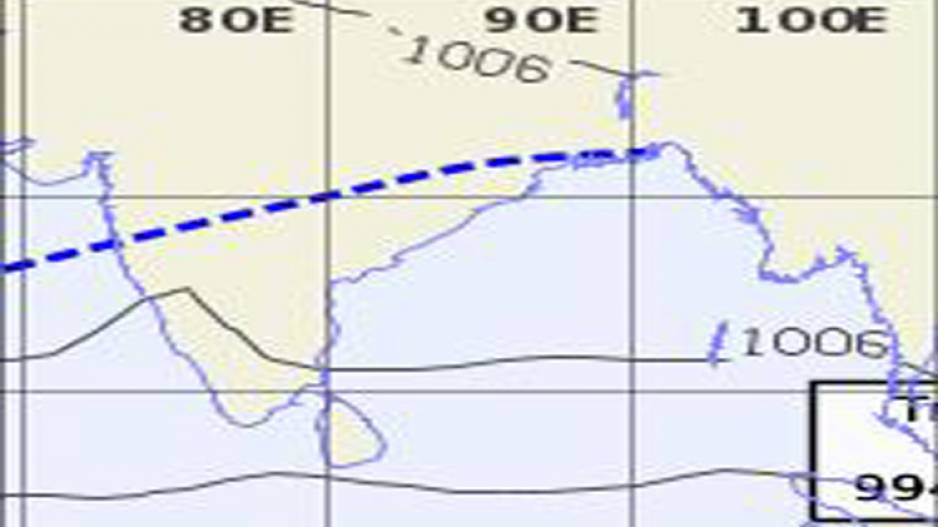 The passing up of the trough line over Odisha shows monsoon still over Odisha and Chhattisgarh.

The wind pattern in the north Bay of Bengal (near Odisha and West Bengal) today has been around 75 deg from north, and at times between 20-30 degree from north. This data shows the wind is blowing mainly from east and north east.

As per the forecast of INCOIS, the wind will blow in the east direction in the northern bay in the coming 48 hours. Both the models predict the formation of a low pressure area over the central bay around Oct 14.

And the system will gradually move and cross the Andhra Pradesh coast between Vadarevu and Machilipatnam on October 16.

As a consequence of the weather system, the districts around Machilipatnam are predicted to record a whopping 70 mm rainfall. Moreover, the surface winds are predicted to be in the range of  30-60km/hr. (means the land where the system crosses over will record wind up to 60 km/hr)

Though the State will be remaining almost dry during the Durga Puja days (up to Oct 14), the IMD short range forecast shows south coastal Odisha will be recording around 40 mm accumulated rainfall in 24 hours on Oct 16, due to the LPS crossing Andhra Pradesh.

It says, Puri, Khordha, including Bhubaneswar, Cuttack, Bhadrak, Kendrapada, and Jagatsinghpur may record an accumulated rainfall in the range of 20 mm. But no significant rainfall forecast for other districts in the State.

As per the IMD-GFS model, low pressure in the northern Andaman sea is likely to form on Oct 17. And the intensified system will eye on Odisha on Oct 18. The surface wind speed is predicted to be at around 60-80km/hr.  The wind speed forecast of IMD shows the system will be a depression.

And the forecast is, the system will cross the land around Jagatsinghpur on Oct 18. But it will bring very heavy rainfall, the forecast says.

The model predicts rainfall in coastal Odisha (Puri to Balasore) in the range of 40mm in 24 hours. However, the accumulated rainfall in and around Jagatsinghpur will be 70mm per 24 hours. Centra Odisha districts will record at least 20mm rainfall before the system's cross over to land.

NCEP-GFS: Based on sea conditions at 11:30 hrs today, the US model predicts a very intensified cyclone (extremely severe cyclone) to hit Odisha on Oct 17-18 between Puri and Jagatsingpur.

ECMWF: Another top weather forecasting agency, ECMWF has predicted a depression hitting Odisha coast on and round Oct 18. The place of landfall has been predicted between Puri and Jagatsinghpur.

The model summary shows Odisha will be bracing up for very heavy rainfall and windy conditions on Oct 18. While GFS predicts it to be of an extremely severe cyclone, IMD and ECMWF put it in the depression category, as of today.