Before Becoming He-Man, Know How Bollywood Made Dharmendra A Lanky Lad In Just 1-year!

Even as his caravan chugged ahead in 1960, Dharmendra had to weather the showbiz storms from the likes of Shammi Kapoor and Rajendra (Jubilee) Kumar in 1960s to Rajesh Khanna in 70s

This famous dialogue 'Lohe se loha kat sakta hai ... loha mar nahin sakta (Iron can cut Iron...but Iron cannot die.) screens the reel career of a legendary actor of the Hindi Cinema. The popular actor for three decades had a record to his credit - 10-plus hits in the decades of the 60s, 70s and 80s.

Known in the tinsel town as the actor who make his own plans, he rocked the silver screen with 49 hits - the highest ever by any actor in the history of Bollywood. He is very handsome and romantic too. He is Bollywood's answer to Hollywood's James Dean. (see the image below) 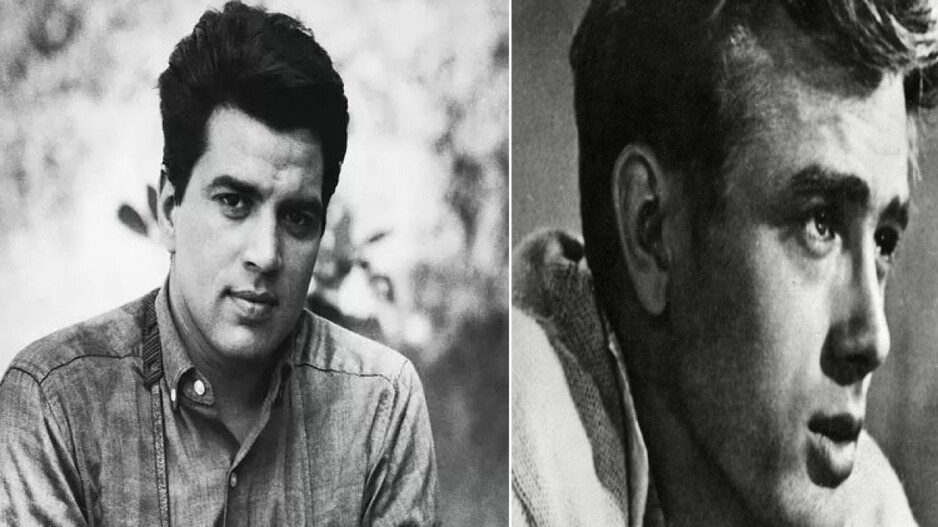 Even the thespian Dilip Kumar in 1958 had once said, I would ask God to bless me the face and looks of this young man."

This versatile actor is none other than Bollywood's Garam Dharam Dharmendra - the He-man of Hindi Cinema. The 'Jugnu' of Hindi Cinema has turned 87 on December 8 this year.

Hindi films are known for their twists in climaxes. True to the B-town style, before adorning the throne of 'He-man' in the Hindi Cinema, Bollywood had squeezed Dharmendra so cruelly that he turned a lanky lad from the muscular Punjabi Munda (boy) in just a year.

In an interview, the macho hero had said, "My entry into Bollywood was beautiful. I got selected in the Filmfare Talent Contest in 1958. But before foraying into the reel-world in 1961, I lost weight very rapidly. I turned into a lanky lad in just 1-year. The struggling days were slack-jawed for me."

Even as his caravan chugged ahead in 1960, Dharmendra had to weather the showbiz storms from the likes of Shammi Kapoor and Rajendra (Jubilee) Kumar in the 1960s to Rajesh Khanna in the 70s.

The shine for the Punjabi lad had come in 1966 when Phool Aur Patthar (with Meena Kumari as a lead actress) went on to become the first blockbuster for the young Dharmendra. However, the climax in Garam -Dharam's filmy safar had come in 1971, when the film Mera Gaon Mera Desh, considered by many as pre-cursor to all-time blockbuster Sholay, that was released alongside the then heartthrob Rajesh Khanna's Haathi Mera Saathi, went on to become a phenomenal success at the box office. Incidentally, Haathi Mera Saathi had been Rajesh Khanna's last blockbuster.

And in the silver screen of Hindi cinema, the golden era of handsome hunk Dharmendra had begun.  The rest is history. Films like Sholay, Charas, Dream Girl, Seeta Aur Geeta, Dharam Veer, Professor Pyarelal et al went on to become silver, golden and platinum jubilees at the box office. He was then come to know as Bollywood's 'bankable star'.

Even as the Veeru of Sholay was married to Prakash Kaur - mother of Sunny and Bobby Deol - at the age of only 19-years in 1954, the He-man was love-struck for 'Dreamgirl' Hema Malini.

In an interview with a newspaper earlier, Hema said, "Its love at the first sight. The minute I saw Dharam ji, I knew he was the man for me. I wanted to spend my life with him."

It seems the love story of Dharam and Hema has been a typical Bollywood story. Hema's family were against the marriage. Both her father and mother didn't want their daughter to marry a married man. But the Basanti of Sholay didn't budge. One day she called Dharmendra and put a drastic proposal that stunned the He-man.

In an interview, she said, "My family members were against the marriage. But I did not want to marry anyone other than him. Because I loved only Dharmendra. In such a situation, I called him one day and said, ‘You have to marry me now.’ 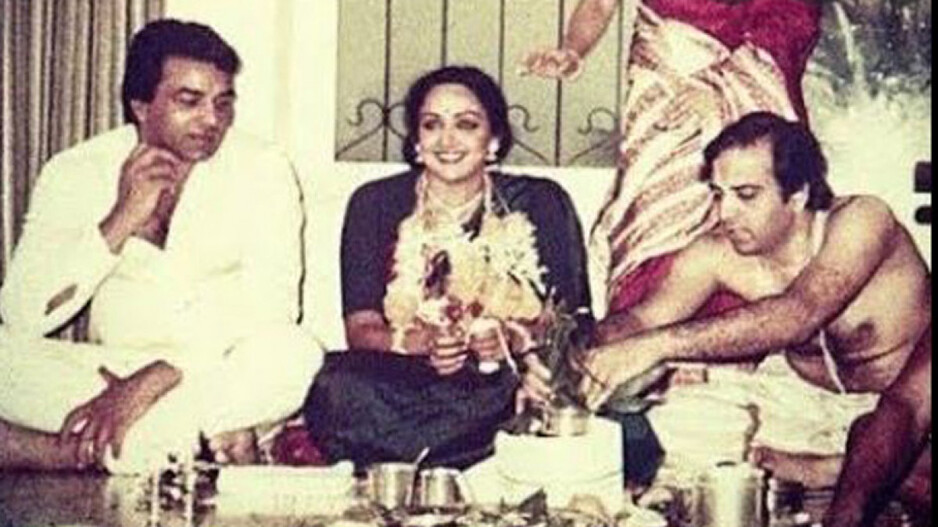 The 'Raja-Jani' of the silver screen became real-life partners in the year 1980.

While Dharmendra acknowledges that Hindi Cinema's tragedy queen Meena Kumari had a big role in 'the making of the Dharam-Garam' during the formative years of the 1960s, the gossip about their link-up rocked Bollywood in a big way then. So what is that had lit this gossip to grow into a wildfire?

Senior journalist Vinod Mehta, in his biography "Meena Kumari - The Classic Biography," had written, "Once, Dharmendra was at a premiere of a movie in Delhi and at the party, he drank heavily. On his way back to Mumbai, the airport authorities didn’t let him in at the airport and he shouted at them: But I must get back to Bombay. I must. Meena is waiting for me. 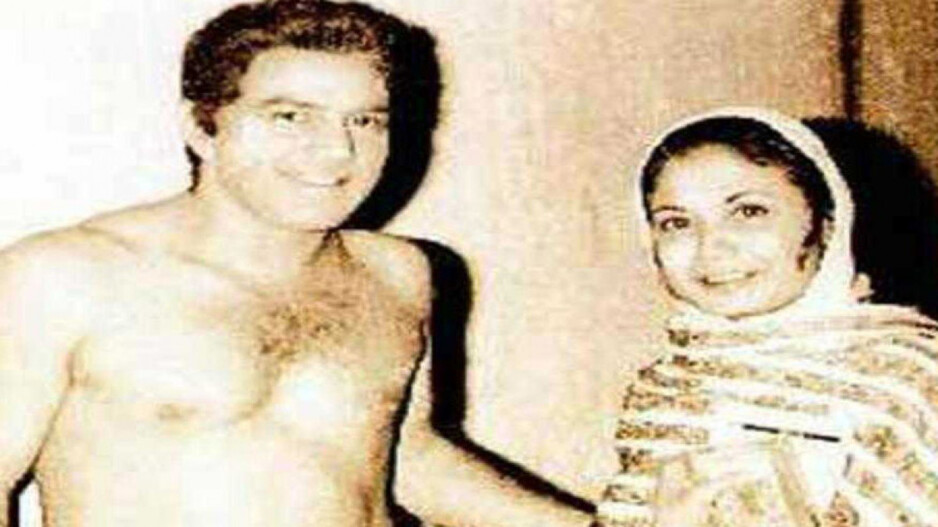 The veteran scribe had further written that "once, Meena had gone to a picnic with her convoy of friends and Dharmendra also happened to be there. But when they had to board their cars for their return journey, he mistakenly sat in another car and that made Meena too hysterical. She panicked and wanted to know where Dharam went. She kept shouting: “Where is my Dharam? Where is my Dharam?” 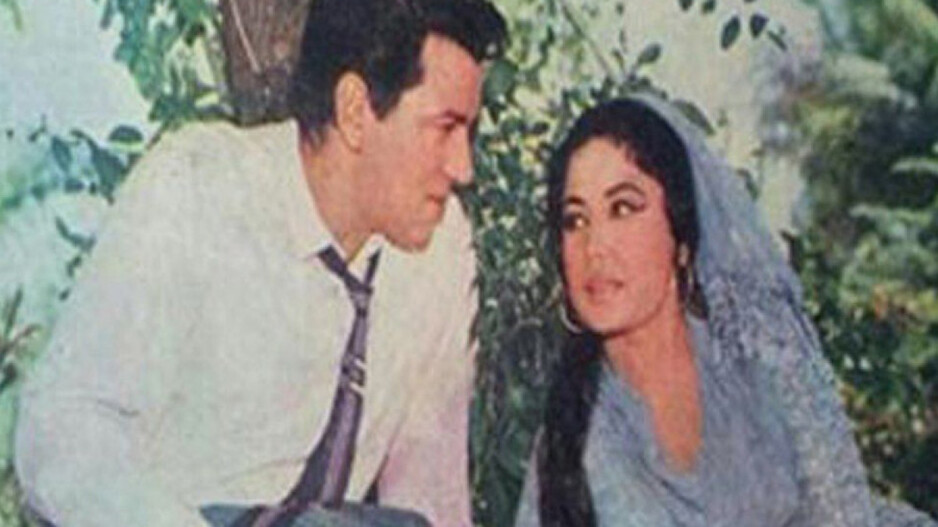 It was all such epic instances that had lit the link-up story spread like the wildfire in the woods of Hindi Cinema.

However, in the biography, Mehta wrote, “The popular view is that Meena and Dharam were intimate for three years. The inside view is that the intimacy lasted no more than six months."