Here is a bonanza for the banking aspirants. The new year will bring huge vacancies, both at the officer and clerical level, in the public sector banks in the country. As of Dec 1, 2021, the 19 Public Sector banks in India are saddling with a whopping 41,117 vacancies.

Replying to a query in Lok Sabha, Finance Minister Nirmala Sitharaman today said as per inputs received from Public Sector Banks, as of 1.12.2021, there are 8,05,986 sanctioned posts and 41,177 vacant posts in Public Sector Banks. She further added that banks will undertake staff recruitment to fill the vacancies on an ongoing basis as per their requirement.

The details are given in the table below. 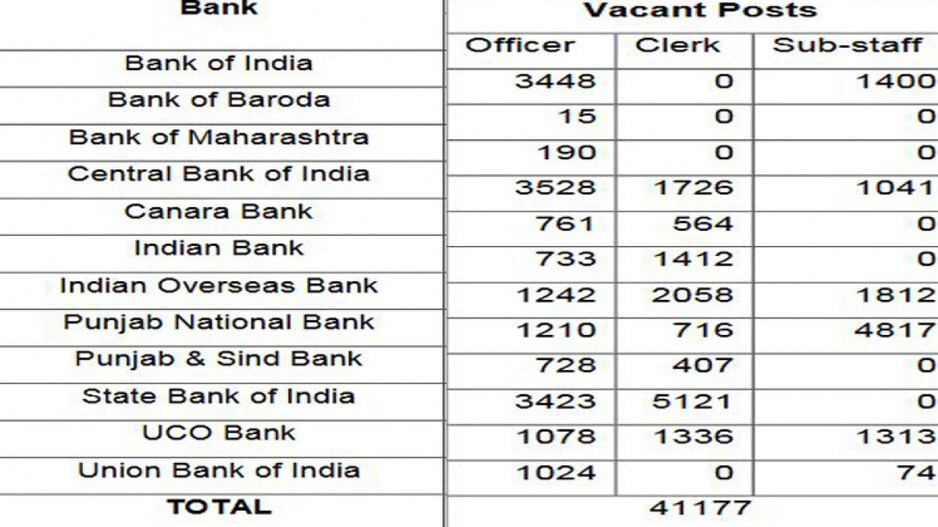 While only recently, SBI has announced recruitment for the Circle based Officer ( CBO), as per top sources in the SBI LHO (Local Head Office) here, the premier bank of the country will soon go (April-May 2022) for recruitment of around 1400 probationary officers for its 24,000 branch network across the country.

The top bank of the nation will also conduct recruitment (June-Aug 2022) at the clerical level next year. The tentative vacancies will likely be around 2700 - 3500.

Since recruitment at the officer level is conducted on an all-India basis, as per sources, in 2022, IBPS may conduct PO recruitment for over 5000 vacancies across the PSBs.

Besides, nearly 1100-1200 vacancies are likely to be notified at the level of specialist officers in various PSBs.

In sum, the year 2022 will see the PSBs going for advertising recruitment notice for nearly 6000 posts at the officer level and around 9000 -11000 posts at the clerical level.