2 Persons Trafficked Everyday In Odisha: Know Why State Is No 2 In Country

Odisha government has yet to have any special law to control organised crime. In most cases, police crackdown limited to intermediaries alone, conspirators were let go scot-free, which is a big loophole, says UNODC SOP

Odisha No 2 in Human Trafficking In India

Odisha has emerged as the second top state in the country in human trafficking for the two consecutive years of 2019 and 2020, despite having 25 IAHTU (Integrated Anti-Human Trafficking Units).

As per field analysis reports of Shakti Vahini, a New Delhi based NGO working in the field of combating trafficking, four states namely West Bengal, Odisha, Jharkhand and Assam in the country have a very acute human trafficking scenario in the country.

With the UN Office on Drugs and Organised Crime (UNODC) calling human trafficking or child trafficking an organised crime, the time is ripe for the State to have legislation on the lines of control of organised crimes, say experts.

As per UNODC, trafficking is an organised crime because it involves elements of several crimes - selling, buying, sexual abuse and exploitation, criminal confinement and abduction. Moreover, the scene of crime extends from the source area through the transit to the destination area. The multiple crime players are networked and organised. Also, by trading humans, they earn profits at multiple stages.

As per NCRB 2020 report, though the Odisha police had recorded 103 human trafficking cases, the number of victims trafficked stood at 741. The numbers in 2019 stood at 876.

However, as per Shakti Vahini report, Odisha is a major source state for trafficking of women for commercial sexual exploitation. And the most effected districts are Balasore, Malkangiri, Nayagarh, Kendrapara, Nabarangpur, Nuapada, Korapat, Rayagada, Ganjam and Puri.

Besides, the House Committee on Women and Child Welfare (1999-2000) of the Odisha Assembly had then officially acknowledged that immoral trafficking of girls by brokers or agencies, on the pretext of providing employment as well as arranging marriage, has been rampant in the Kalahandi, Balangir, Mayurbhanj, Sundargarh and Balasore districts.

As per the Shakti Vahini report, as many as 26 districts in the State report trafficking of women. The districts are given in the table below. 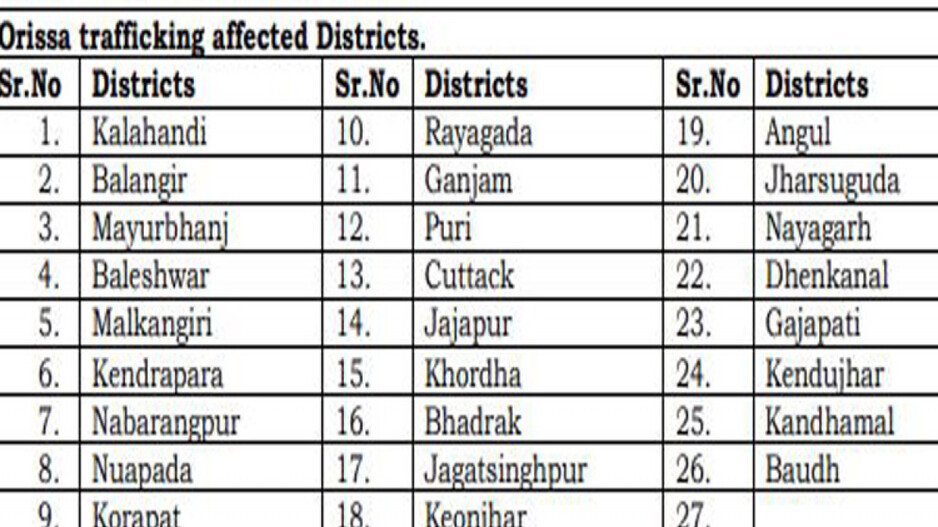 However, the numbers are only a part of the story. The NCRB report shows a massive 3,259 girl children who had been missing since 2011 were yet to be rescued. Over and above the huge untraced number in all these years, 2020 recorded the missing of a whopping 2556 girl children.

The groundswell evidence to the NCRB report has been the missing case of a 2-year old girl Pihu from Jajpur. Though the kid went missing in August last year, the Odisha police are yet to conclude the results of its search operation.

In Aug 2021, the NHRC had intervened in the matter and asked the State police to submit a status report. The parents told the rights body about not being satisfied by State police investigation.

Similarly, the year 2020 saw the kidnap, rape and murder of a girl child Pari in Nayagarh. The police there didn't take cognizance of the missing report. Only a self-immolation bid before the State Assembly spurred the Police to take action.

As per UNODC, states, where the missing children cases are acute, should have special laws to control the proliferation of organised crime syndicates or gangs.

Legislation to control organised crimes will make the police mandatory to release a list of total gangsters in operation in the State.

In 2016, the number of trafficking victims in Maharashtra stood at 1066, the highest in the country.

In 2017, the then Devendra Fadnavis government had decided to include the crime under the Maharashtra Control of Organised Crime Act (MCOCA) and declared it an economic offence too. The main objective was to strike at the economic nexus of human trafficking.

The Result: The count of victims of human trafficking dropped to 986 in 2019 and crashed further to 512 in the pandemic hit the year 2020.