The family also thanked the Mumbai Police force "for their sensitivity and compassion."

Late television actor Sidharth Shukla's family has released their first statement after his untimely demise. They have thanked fans for all the support and have requested privacy to grieve.

The statement read: "Heartfelt gratitude to everyone who has been a part of Sidharth's journey and showered him with unconditional love. It definitely doesn't end here as he now resides in our hearts forever! Sidharth valued his privacy, hence we request you to allow our family the privacy to grieve."

The family also thanked the Mumbai Police force "for their sensitivity and compassion."

"They have been like a shield, protecting us and standing by us every minute of the day! Please keep him in your thoughts and prayers. Om Shanti - The Shukla Family," it said. 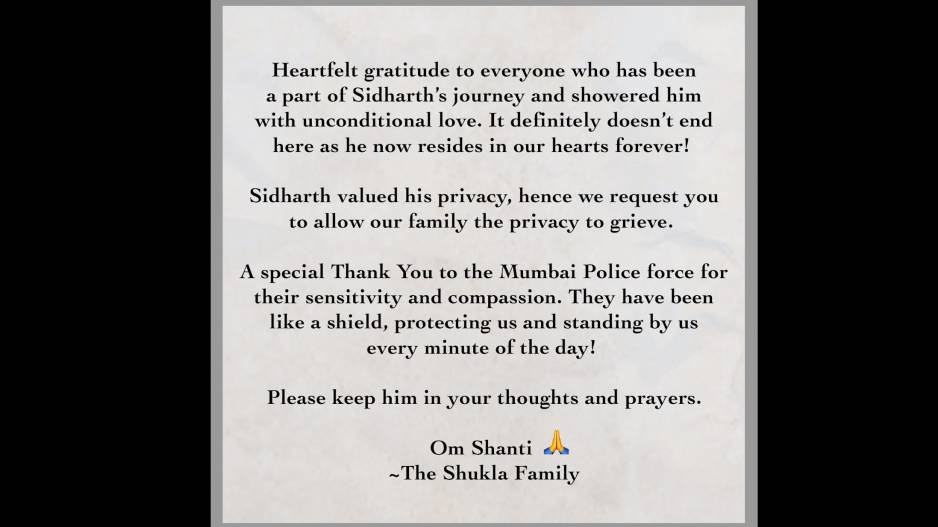 According to reports, a prayer meet will be held in Sidharth's honour at 5 p.m. on Monday. It is being organised by his family and fans can join in virtually.

Known for his work in shows such as 'Babul Ka Aangann Chootey Na', 'Dil Se Dil Tak' and 'Balika Vadhu', Sidharth, who came out as the winner of 'Bigg Boss 13', died aged 40 after suffering a massive cardiac arrest last week.

He is survived by his mother Rita Shukla and two sisters.