But, a recent video of Iulia Vantur that surfaced on social media has fuelled up the discussions. When paparazzi inquired when she is going to get married to Salman Khan, she remained silent and laughed in response. However, the video was later removed by channel.

Rashmika Mandanna spills beans on her Swayamwar, here's who she wants to take part #Watch

Bollywood actor Salman Khan is counted among the most 'eligible' bachelors of the B Town. Though the actor has been associated multiple times with many co-actors and girls, the 56-year-old is still single.

Recently, rumours took the internet by storm that the Dabangg actor has tied the knots with co-actress Sonakshi Sinha. Even several pictures of the duo went viral in which they are seen exchanging rings in wedding attires. Moreover, a picture was circulated on different social media platforms in which Salu Bhai is seen putting vermilion on Sona's forehead. Rumours were rife that the duo got married secretly. But, those photos were edited and had no authenticity. 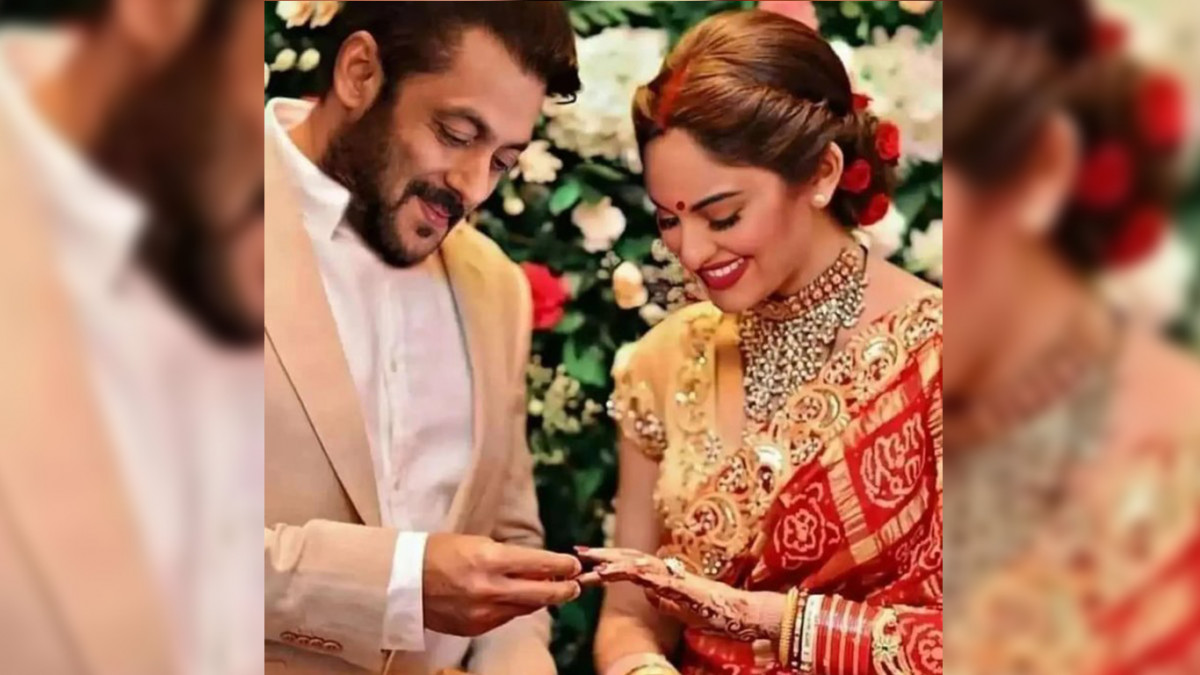 On March 5, Sonakshi reacted over the rumours. In one of the posts, the actress commented, “Are you so dumb that you can’t tell the difference between a real and a morphed picture." Moreover, she dropped laughing emojis with the comment.

Following the Bhuj actress' comments, it is clear that Salu bhai's eligible bachelor tag remains intact. However, igniting the discussion, the Ready actor shared a video on social media in which he is seen with younger Salman Khan and the actor confirmed of getting married.

As seen in the video, younger Khan, which is similar to his looks in Andaz Apna Apna, asked the older Khan about marriage.

To such a response, younger Khan was shocked and said surprisingly, "Ho gayi!!! (Over!!!)."

However, the video seems to be a promotional advertisement as the caption, "Hui ya na hui…jaanne ke liye parson dekho!!! #ad."
Even the older Khan is seen adorning a blue t-shirt on which it is written ‘Pepsi-Cola’.

Iulia Vantur Remains Mum When Asked About Marriage With Salman

The Kick actor is rumoured to be dating Romanian model, television presenter and singer, Iulia Vantur. The rumoured couple are often seen together at different wedding functions or a festive bash. However, till date, the duo haven't officially confirmed their relationship.

Back in 2016, there were rumours that Salman Khan secretly tied the knot with Iulia. But, busting those, Salu bhai told to Mumbai Mirror, “These are just rumours as you said yourself. If I had got engaged or was getting married, I wouldn’t wait for the news to leak out. I would announce it myself, it would be a proud moment for me."

But, a recent video of Iulia Vantur that surfaced on social media has fuelled up the discussions. When paparazzi inquired when she is going to get married to Salman Khan, she remained silent and laughed in response. However, the video was later removed by channel.

A few days back, during the Bigg Boss 15 finale Salu Bhai spilt the beans of not being single while interacting with Shehnaaz Gill.

During the episode, Naaz said, "Sir, aap single hi acche lagte ho (You look good as a single only).

Well, the recent incidents in a row about Salman getting married could be a mere coincident or could be a major hint about the much-awaited announcement. What do you think!