A few fans reportedly got injured at an event that Rashmika Mandanna attended recently. The diva expressed her concern for her fans in her latest Instagram post.

Rashmika Mandanna was at an event recently where reportedly fans got injured. The Southern diva got worried about her fans and shared her concern on her Instagram story. In her post, the actress thanked her fans for attending the event. Rashoo added that she heard that someone got injured at the event and hoped that all of her fans who attended the event are okay and taking good care of themselves.

The Dear Comrade actress is currently busy in the promotions of her upcoming film Pushpa: The Rise which is slated to release in the theaters on 17th of this December. Throwing light on her experience of working with the Southern superstar Allu Arjun in Pushpa 1, Rashmika said that it was her dream to work with him since the time he had come as a guest for the event of Geetha Govindam. 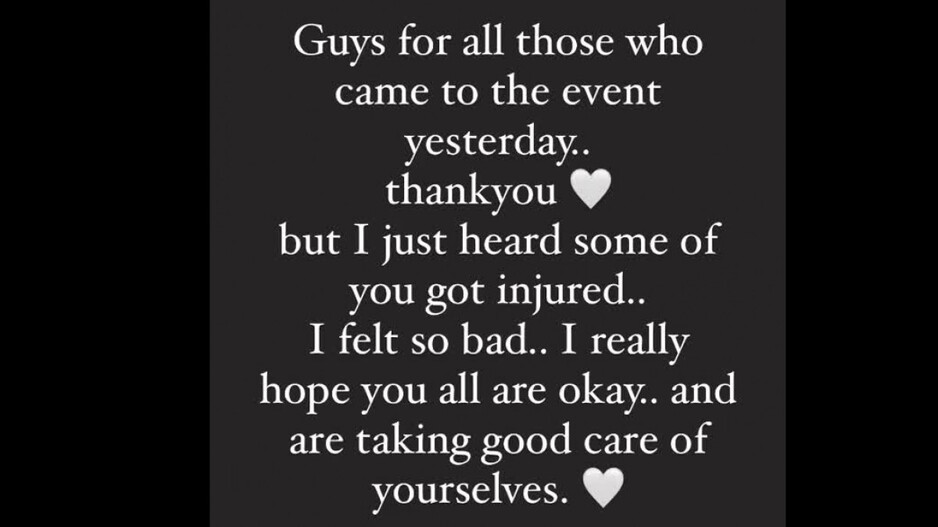 She further added that on the first day of the shooting she was very nervous. But Bunny’s kind words made her feel relaxed. According to Rashmika, Allu Arjun told her that he had selected her for her ability as an actor and these words calmed her down.

The heart crush of India said that director Sukumar was very much keen on getting the looks and character of Srivalli right and for that she had to work very hard. Earlier Sukumar did not like the ook of Srivalli that Rashoo and the team had come up with. With regular inputs from Sukumar, an intense, dusky girl with an angry side was evolved as Srivalli.

For her getting the dialect of Chittoor right was also a big task for which she had to work really very hard. Allu Arjun and Rashmika Mandanna starrer Pushpa: The Rise will be released across pan India and the makers are expecting a good response from not only Southern India but all parts of the country.

Even Rashmika recently said that Allu Arjun has a massive following even among Bollywood moviegoers and there is a lot of curiosity about Pushpa 1 among them.