Rashmika was not only able to astonish her fans with her dialogue delivery but also able to impress Deepika.

South Diva Rashmika Mandanna, who will be soon making her Bollywood debut, is already winning hearts of fans and B-Town actors alike. After Sidharth Malhotra and Neena Gupta, Rashmika has been able to impress Ranveer Singh's ‘Queen’ and Bollywood Diva Deepika Padukone.

Recently, Rashmika during an interview recreated one of Deepika's iconic ‘Ek Chutki Sindoor’ scene from her debut film, 'Om Shanti Om'. Rashmika was not only able to astonish her fans with her dialogue delivery but also able to impress Deepika.

Sharing the video clip on her Instagram stories, Deepika wrote,"Adooorable " 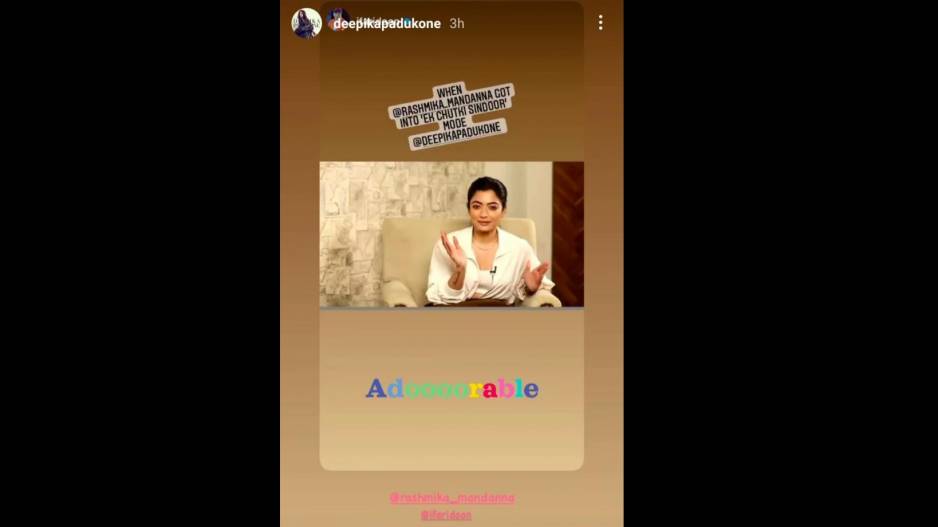 The video clip featured an interview by Faridoon Shahryar who was in a conversation with the south diva.

On the work front, she will be next seen in Pushpa alongside superstar Allu Arjun and her debut Bollywood film Mission Majnu opposite Sidharth. Rashmika also has Aadaalloo Meeku Johaarlu and Goodbye in her kitty.