Dressed in an all-black ensemble from head to toe with a black face mask, the actress was seen coming out of a restaurant.

National Crush Rashmika Mandanna, who is currently basking in the success of her latest release 'Pushpa: The Rise', was recently spotted in Mumbai.

Dressed in an all-black ensemble from head to toe with a black face mask, the actress was seen coming out of a restaurant.

However, as she was heading to her car, a young girl approached towards her and asked for money. To the shock of many, as per media reports, the diva ignored the girl and boarded her car to leave.

Mahesh Babu Breaks Down! Emotional Moment For The Superstar

This was captured by the paparazzi and presently going viral on the internet.

In the widely circulated video on social media platforms, Rashmika is seen walking towards her car and the little girl following her and asking her to give some money to eat. As the girl tries to come nearer, Rashmika's team member comes in between them and helps Rashmika board the car.

Though Rashmika is seen saying something to the girl, it is not audible but one of Rashoo's team members can be heard saying that he will be giving her money.

However, afterwards, a couple of kids join the little girl and they can be seen talking to Rashmika. But later, the team member who was seen promising to give money also boards the car and they leave.

Soon after the video was shared on Instagram, netizens took to the comments section to troll her for not helping the kids.

Here are some other comments: 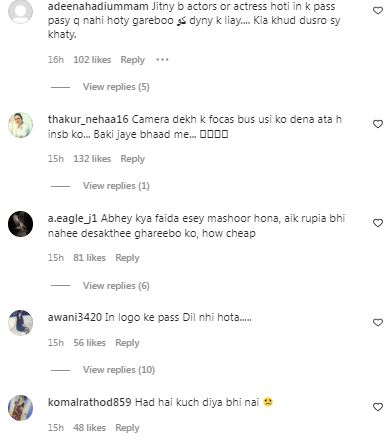 On the work front, Rashmika Mandanna has Aavaallu Meeku Johaarlu, Mission Majnu and Goodbye in her kitty. She is likely to begin shooting for Pushpa: The Rule in March.