Vignesh took to his Instagram story and posted a picture with some kids and wrote, "SOME KIDS TIME...PRACTICE FOR THE FUTURE.”

South Superstar Nayanthara and Vignesh Shivan got married in June this year after dating for years. The couple had their honeymoon in Spain and now, rumours are making rounds that Nayanthara is pregnant.

Nayan and Vignesh often share pictures on social media giving fans updates about their projects. But a recent post of the director-producer has sparked the rumour of Nayanthara and Vignesh Shivan expecting their first child.

Recently, Vignesh took to his Instagram story and posted a picture with some kids and wrote, "SOME KIDS TIME...PRACTICE FOR THE FUTURE.” 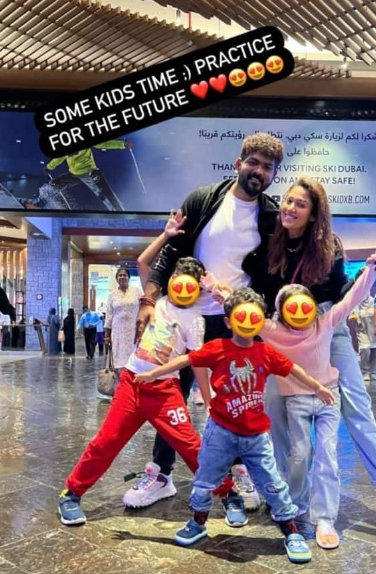 This post, especially the caption, has left his fans wondering whether they are planning a baby or Nayan is already expecting. Check the post below:

"It's a great news. Waiting for the birth of the next superstar," said a fan while stating that the couple should not delay as they don't have many projects in the kitty for now.

"Nayan and Vignesh dated for around 7 years before they tied the knot. Their wedding was a huge celebration for us, and we expect the birth of the next superstar to be a bigger one," said another excited fan.

Though the actors are yet to address the rumours, fans are quite sure that both Nayanthara and Vignesh must be planning to become parents and that in itself is a big news for them.

Nayanthara recently threw a surprise birthday party for husband Vignesh. Later, the director posted pictures of the birthday celebrations that happened in Dubai and wrote, "It's my eighth birthday with you my thangamey #Nayanthara! You have made every birthday extra special than the previous one!"

He continued: "Buta. This one was too emotional! Thank you for being the lover you are! You know what makes me the happiest and you gave me exactly that! "To more years of love, happiness and peace! Thank you. Love you and the way you love me, more and more !!"