According to the free online encyclopedia which is created and edited by volunteers around the world, Siddhant had married Malayalam actress Mallu Maria in 1993

Major goof-ups in the Wikipedia profile of Ollywood superstar and politician Siddhant Mahaptra have been noticed.
Wikipedia has mistakenly claimed that Siddhant is the brother-in-law of Bollywood actress Farah Naaz.

According to the free online encyclopedia which is created and edited by volunteers around the world, Siddhant had married Malayalam actress Mallu Maria in 1993 and had three sons and a daughter from his first wife Mallu.

Again he tied the nuptial knot with Kannada actress Mayesha Taslim Hashmi from whom he had daughter Saisiddhi Mohapatra and son Saisamartha Mohapatra.

Going by the data of Wikipedia, Siddhant has six children.

In reality, he married Odia actress Mama Mishra and is the father of his only daughter Saisiddhi. Saisamartha Mahapatra is his younger brother Chittaranjan Mahapatra’s son. 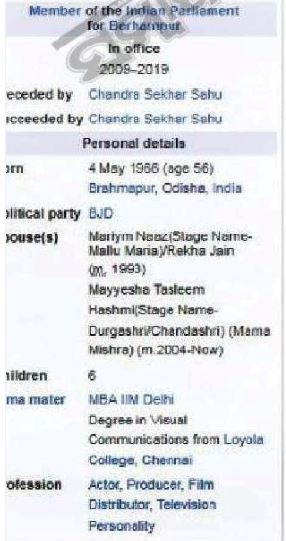 The news has become viral on social media.

Soon after the news became viral, it did not go well with his fans. They termed it disgraceful. Presenting such fictitious facts regarding Odisha’s one of the popular actors is really disgraceful.  They have blamed Wikipedia content writers for the goof-ups.

It is learnt that after some media houses pointed out the goof-ups, Wikipedia corrected the facts in his profile page.

This is not the first time Wikipedia made such blunders. A few days back, miscreants tampered with Indian cricket player Arshdeep Singh’s Wikipedia page and added some false information.

Screenshots of the Wikipedia page were shared by trolls on Twitter which showed Arshdeep’s name was edited to Major Arshdeep Singh Langra.

It was changed again a minute later to "Major Arshdeep Singh Bajwa". The words India and Indian were replaced with Khalistan and Khalistani. The page did not display the misleading information for long as Wikipedia editors reversed the changes within 15 minutes.