Even though the two are allegedly trying to keep their romance under wraps, the two have been caught in action by paps a number of times.

Without working on a single movie together, Katrina Kaif and Vicky Kaushal have made headlines for allegedly dating each other for quite some time now. The fans continue keeping a tab on any new hints the rumoured couple drops on social media. On Vicky’s special day, it was Katrina’s love-filled wish that took the cake.

As Vicky Kaushal celebrated his birthday on Sunday, celebrities and fans across the country poured in their wishes for him. Vicky ringed in 33rd birthday with his family with low-key celebrations. His brother Sunny Kaushal had shared a picture of the actor posing with a birthday cake as he wished him on Instagram.

But every ‘Vickat’ shipper was waiting for the Bollywood diva’s birthday wish. Katrina wished rumoured beau with a throwback picture of the actor from the time when he spent some days with the jawans of the Indian Army in Arunachal Pradesh. The URI actor is flashing his candid smile in the picture. Katrina wrote on the story, ”Happiest birthday, Vicky Kaushal. May you always be smiling.” 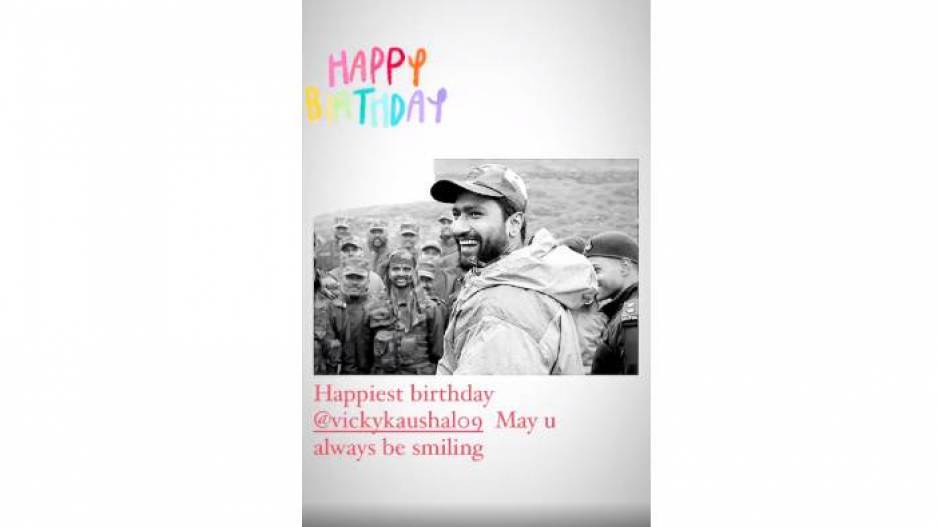 Even though the two are allegedly trying to keep their romance under wraps, the two have been caught in action by their fans and paps a number of times. Some time back Katrina shared a picture of playing games with friends at home where Vicky was also accidentally snapped. The B-town beauty deleted the picture soon after.