She will be seen essaying a Muslim girl named Sabana in the flick.

Ending decades of speculation, Scooby Doo’s Velma steps out of the closet

Veteran actor Arun Bali passes away at the age of 79

Rubbing egg yolk on your scalp maybe great for the follicles, but if the yellow is on your face, it isn’t quite as pleasurable. The act of throwing eggs on your face makes you feel angry because it stinks and is almost always messy.  Actress Archita came across such a situation when she was thrown eggs recently.

Yes, you heard it right. Miscreants threw eggs on her when she was buying vegetables at a local market. However, she did not retaliate but kept mum.

Archita’s fans must be feeling bad about it. Please, don’t be because it is a movie scene. Going by the sequence of the movie titled Mahisasura starring Archita Sahu as its lead protagonist, miscreants were seen hurling eggs at the actress when the latter was buying vegetables at a market.

Archita will be seen donning a lawyer’s role in the upcoming movie 'Mahisasura' produced under Tarang Cine Productions.

According to sources close to her, she will be seen essaying a Muslim girl named Sabana in the flick. She will be seen donning a burqa and delivering dialogues in Urdu. The actress is leaving no stone unturned to give justice to her character. 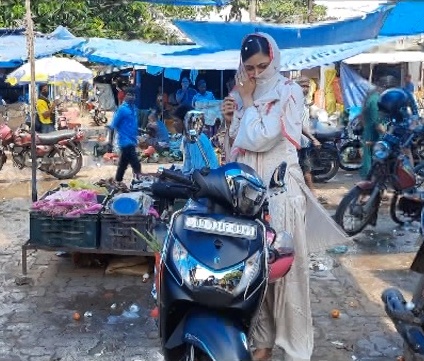 Without divulging much about her character, she said “We have a misconception about Muslims that all Muslims are hardliners which is not true. Mahisasura is based on that theme. My character Sabana Begum will be seen fighting for truth and going to any extent to win over evil. Though Sabana is simple by nature, she never refrains from fighting for her rights. I can divulge this much.”

Mahisasura is all set to release during Dussehra.