As per a study published in medRxiv, Odisha has reported a massive 79 per cent excess deaths during the period of April -June 2021, which incidentally coincided with the Covid-19 second wave in the State

Underreporting of covid-19 deaths in odisha?

On July 25, Odisha with 68 deaths due to Covid-19 figured among the top 3-states with new deaths, Maharashtra and Kerala were the other two. The trend is being maintained by the State since the beginning of July third week.

The moot question then is are the Covid-19 deaths during the second wave very high in Odisha?

As per the official data available with the Odisha Health Department, the total deaths during the second wave in the State as of date stood at a high of 3,507. The current case fatality rate based on average daily data has risen to 3.2 per cent from 1.1 per cent in the third week of June. In the first wave, the total official deaths in Odisha reported by the State Health Department stood at around 1,995.

The official data here clearly hints at not only a rise in the number of confirmed cases in the State but also the deaths. But allegations are flying thick and fast. many, including experts, say, the official deaths are an underreporting of the real enormity.

Are Deaths Underreported in Odisha?

The issue of underreporting of Covid-19 deaths by the states in the country has snowballed into a big issue recently. Even, during a hearing, the country's Apex Court asked the Centre, "Death certificates say death due to lung problem and heart issues. Families of victims have to rush from pillar to post. Is there any uniform policy on issuing death certificates to Corona victims? Or are there any guidelines?"

Later filing an affidavit at the SC, the Centre said, "All coronavirus deaths regardless of where they take place, should be certified as Covid deaths."

As per the study report titled "Excess mortality in India from June 2020 to June 2021 during the COVID pandemic: death registration, health facility deaths, and survey data", Odisha has reported a massive 79 per cent excess deaths during the period of April -June 2021, which incidentally coincided with the Covid-19 second wave in the State. The lead author of the study is Prof Prabhat Jha MD, DPhil, Canada.

According to the study report, it has arrived at the above estimate after taking into account the data from the Civil Registration System (CRS) for the year 2018-19 and Health Management Information System under Union Health Ministry. The CRS 2018-19 data had been used as the average benchmark. The authors had then calculated the excess deaths in Odisha for the years 2020 and 2021.

The results are quite shocking. If the report is to be believed, Odisha had recorded a whopping 22,000 excess deaths in April -May 2021.  It says, "the excess deaths in April-June 2021 had been a whopping 79 per cent. Incidentally, the period Apr-May had coincided with the second wave in the State. Odisha had recorded the second wave peak on May 22.

Any Loophole in Covid-19 Death Reporting?

What do the ICMR guidelines say? The Apex body in India follows the WHO guidelines. (see the box below) 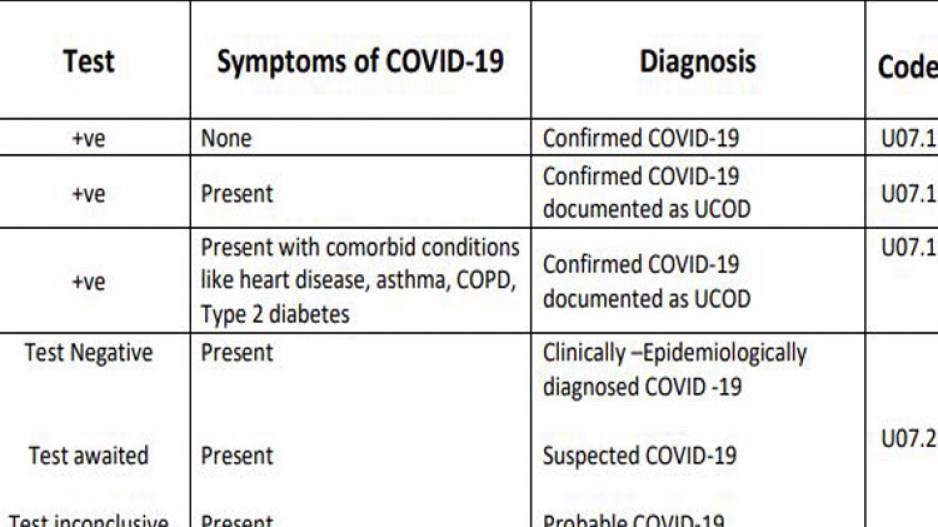 "It has been observed that deaths, which comes under the code u7.2, were not been included in the official Covid-19 toll announced daily. This is how underreporting happens," explained a former Joint Director in the State Health Department. She further added that such instances are galore in rural Odisha.