Second Wave: Odisha Govt In A Fix When Virus Growth Was At Peak

Data shows the second wave surge in Odisha was preventable. Because when the virus was on a growth spree, the State administration failed to enforce the Covid-19 appropriate behaviour. Virus transmission peaked in mid-March to April first week. But restrictions were brought in from mid-April

Odisha in a fix, when virus growth at peak!

There goes a saying early bird catches the worm. It seems the much delayed winging up by the State to catch the virus seems to have triggered the second wave surge in Odisha. The initial dithering by the State cost the people dearly.

While from the very beginning the State Health department always claimed that the pandemic situation in the State was well under control, data shows how the State remained indecisive (couldn't choose between livelihood and life) at a crucial juncture in the second wave that later resulted in spiralling up of the cases all over.

As per a study report by the Field Epidemiology Training Network in the country, the initial spikes of virus transmission had been visible as early as mid-February in the State. But the surge took a decisive turn in March, and the State government then remained indecisive on initiating curbs to stop the transmission surge. (see the image given below) 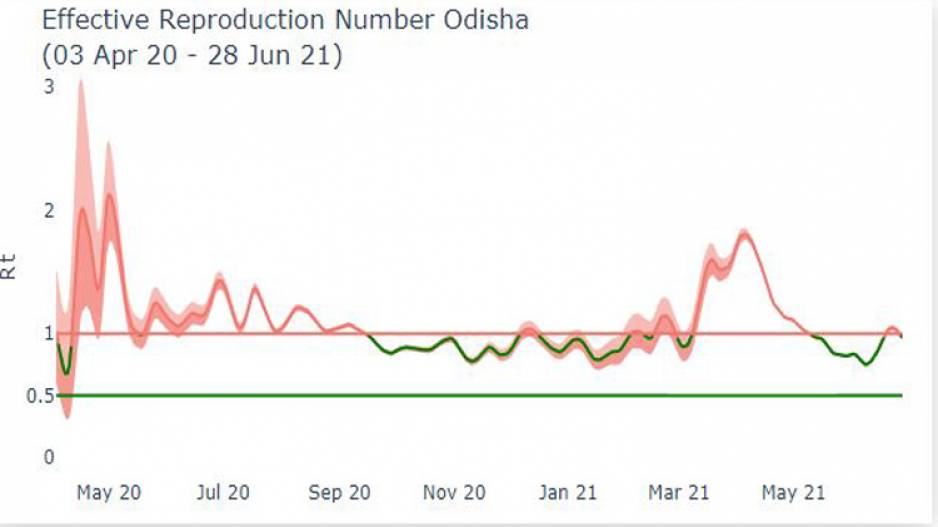 Odisha in A Fix, when Virus growth at Peak!

"The virus got nearly a month's time to attain a transmission of scale. From mid-March, one infected person was transmitting the virus to two. And the vicious cycle of transmission got bigger as the two then infected four resulting in geometric progression of cases in the State. Odisha imposed curbs around mid-April, the time when cases had already attained an explosive proportion. It's due to low testing then, the size of surge remained under the carpet," explained a senior epidemiologist with NRHM  here.
Take A Few sample cases.

Bhubaneswar (Khordha district): On March 19, the confirmed cases detected in Bhubaneswar stood at a mere 15. The daily tests conducted stood at around 500. But a glance at the effective reproduction number tells a tale.

As per the epidemiological data available, the effective reproduction number in the Capital City stood higher at 1.93. The high value shows the transmission of the virus in the Capital City had reached its peak in mid-March itself. But the State government then remained indecisive in taking preventive measures, and also failed in ensuring the 3T model - Testing Tracing and Treatment - to checkmate the virus.

The Impact: In the second wave, the Capital City recorded a whopping around 75,000 cases and a toll count of nearly 300 deaths. The audit of backlog cases has now propelled the 7-days moving average of Covid deaths in the City to a high of around 9, which conveys the severity of the disease in the State capital.

Puri: As per the data available the transmission rate in the district peaked in mid-March when it touched over 2. But restrictions were imposed on May 5. The cases clocked over 26,000 and the mortality burden in the second wave stood at 138.

What does WHO COVID19 Combat Plan say?

As per the apex global health body, the epidemiological value of effective reproduction number (R0) of the virus is an effective indicator in assessing the pandemic scenario in a region (State or country). When the R0 value rules over 1 and on the ascent, then it shows the pandemic is growing exponentially. And the situation demands putting immediate brakes on the transmission cycle followed by widespread testing, tracking and treatment (3T model).

But the data from the ground reveals that the Odisha government remained indecisive when the virus was multiplying fast in the State.