Despite a pickup in second dose vaccination rate in Odisha, with an average of around 35k per day, the State will take a massive 829 days to fully vaccinate the targeted 3.1 cr population. From Aug 15, likely roll out of Corbevax in State

Corbevax roll out in Aug?

While the Centre in an affidavit to the Supreme Court outlined the government's plan to immunise a total of around 94 crore Indian population fully with two doses by December 31, 2021, Odisha need to give a shot to its current rate of the second dose vaccination to meet the Centre's deadline.

The booster shot is all the more essential as a recent IIT Kanpur prediction shows that  the third wave may strike the country in October this year.

Meanwhile, amidst the forecast, the Centre's plan to give a booster dose to the National Vaccination Plan  has emerged out from the affidavit filed before the 3-Judge bench of the Supreme Court on Saturday.

A detailed glance at the Centre's vaccination blueprint reveals that, it seems come Aug 15, another swadeshi vaccine will be made available in Odisha.

The Hyderabad-based pharma firm Biological E's RBD protein sub unit vaccine Corbevax, which will soon get Centre's approval, will be made available to all states, including Odisha, in a big way. The centre is going to procure 30 crore vaccines from the firm.

Though around 10cr Sputnik V will be procured in next 3-months, as per highly placed sources, Sputnik V is likely to be supplied to million plus cities in the country. The detailed count of vaccines the Central Govt will procure during the coming months is given below. 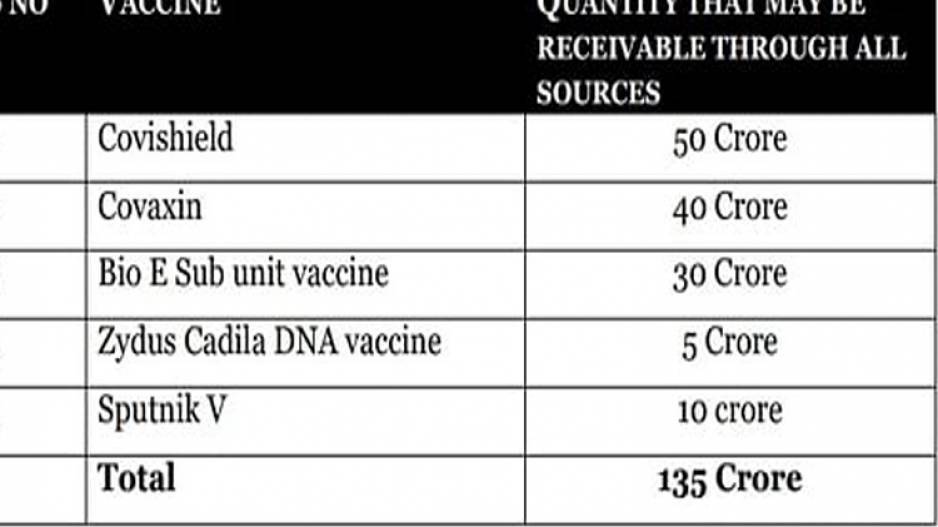 Corbevax roll out from Aug 15?
"The Russian vaccine requires a temperature of -18 - 22 deg c temperature for storage. Though currently polio vaccines in the State are stored at -20 deg C, more deep freezer units are required to store such a large number of the temperature sensitive vaccine. Given the logistics issue, the vaccine is likely to be supplied at centres having good cold-chain logistics, explained a senior NRHM official here.
Odisha Vaccination Juggernaut
The juggernaut of the Odisha vaccination rolls out well. The State has administered a total of 1.15 crore vaccine doses, including the second dose, as on June 27. While the number of single doses were given to 95.32 lakh individuals, over 20.26 lakh had been administered both the doses. To date, only around 6.5 per cent of the targeted population (3.1 crore) has been fully immunised in the State.
As per the stellar performance in the last week, since the beginning of the revamped national vaccination Plan on June 21, Odisha has given a total of over 16.11 lakh jabs, which is over 14 per cent of the total doses administered to people since Jan 16.
However, amidst the buoyant show, the troubling number is only around 2.09 lakh second dose has been administered in the State during the fast-paced week. A whooping over 14 lakh were first doses only.

Will Third Wave Be Severe? Only If R0 Value Of Delta-Plus Grows To 4.5, Says ICMR

Over 1.14 Crore People Have Received Covid Jabs By June 26 In Odisha: Health Minister

Read More
Maths Of Full Immunisation In Odisha?
At the current pace of vaccination, Odisha will take nearly 111 days to administer the targeted 3.1 crore population with at least a single dose. It seems by mid-October, the first dose vaccination will entirely cover the targeted populace in the State.
Significantly, as per IIT-Kanpur's latest prediction, assuming that country will go to unlock phase from July 15, the Third wave may strike the country in October. By this time the State could complete only single dose vaccination of its targeted population.
Because, given the slow rate of second dose vaccination, Odisha has to wait at least till December 2022 to fully vaccinate its targeted population. The maths show at the current pace of second dose vaccination, the State will take nearly 829 days to complete the vaccination process in the State.
The maths show the need to administer around 2 lakh second doses per day (a total of 4 lakh doses per day) in the State. Because, only at this rate Odisha could meet the Dec 31,2021 deadline.