Emphasising that IndiGo is committed to sustainability, Dutta said, "By 2050, we will be carbon neutral... It is not just a promise, we have an action plan in place".

The country's largest airline IndiGo on Friday took delivery of its first aircraft from Airbus that operated on a blend of sustainable aviation fuel and normal fuel.

After the plane landed at the airport here from France on Friday, IndiGo CEO Ronojoy Dutta said the airline is also talking to a lot of manufacturers on Sustainable Aviation Fuel (SAF).

While SAF is yet to be approved for commercial flights, various test flights, powered by such fuel, have been operated. SAF will reduce carbon emissions.

"IndiGo - has taken delivery of its first aircraft operating on Sustainable Aviation Fuel (SAF) from Airbus... This is the first international flight operated by any Indian carrier using SAF," the airline said in a release.

The A320 neo plane -- which took off from Toulouse in France on Thursday and landed at the Indira Gandhi International Airport (IGIA) here on Friday -- had a blend of 10 per cent SAF and 90 per cent normal fuel, according to airline officials.

Emphasising that IndiGo is committed to sustainability, Dutta said, "By 2050, we will be carbon neutral... It is not just a promise, we have an action plan in place".

Over a period from 2016 to 2023, the airline is aiming at a 16 per cent reduction in carbon emissions, he said while speaking at an event at the airport to mark the arrival of the aircraft. 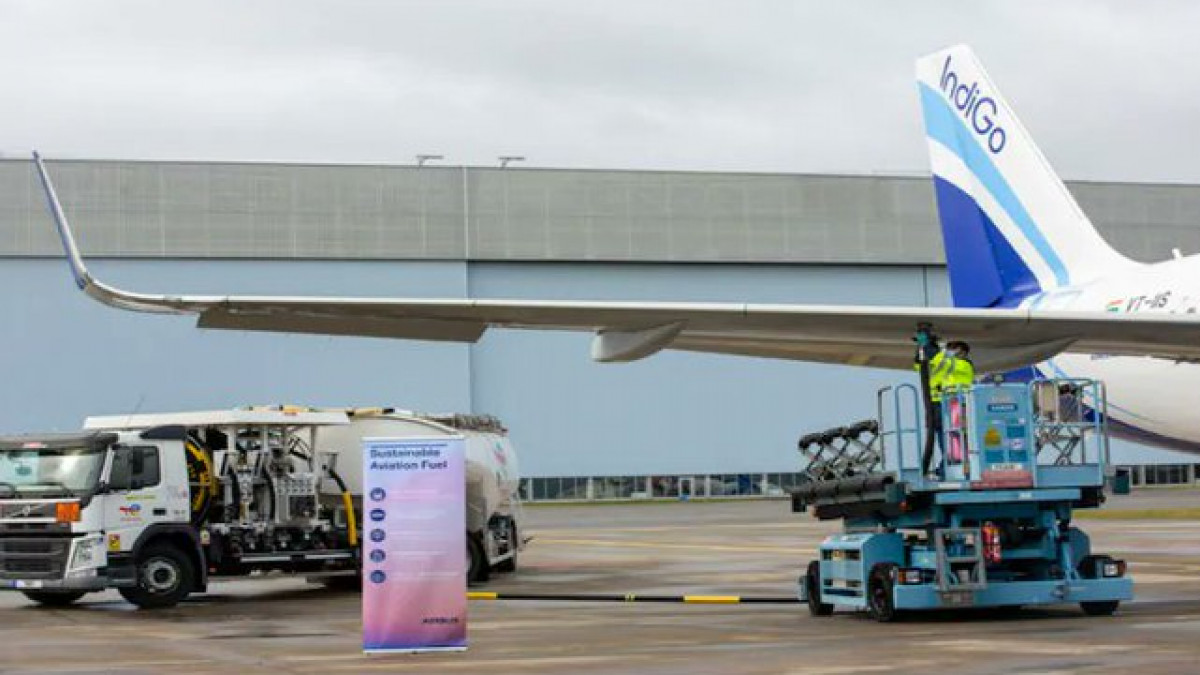 Dutta said the airline is talking to a lot of manufacturers, including Shell, and the Indian Institute of Petroleum, Dehradun.

"They assure us... that as volumes pick up, cost will come down. It is a little bit of a chicken and egg; the airline needs to get the volume then the refiners and producers will bring the cost down. That's why we are all making baby steps. Let's start the journey, start consuming SAF so that refiners can start producing more volumes. That is where we are," he said while responding to a question.

R mi Maillard, President & Managing Director at Airbus India & South Asia, said it is committed to the decarbonisation of aviation and SAF is an important pillar of the sustainability strategy as that contributes to reductions in CO2 emissions.

He noted that all Airbus commercial aircraft are already certified to fly with 50 per cent SAF and by the end of the decade, by 2030, it will grow to 100 per cent.

"I am convinced that a carbon neutral aviation is not only possible but is also achievable during our lifetime. We at Airbus have the ambition to bring the first zero emission aircraft by the mid of the next decade," he added.

IndiGo has been taking various sustainability measures, including conversion of coaches into electric ones. It is also looking at taxiing aircraft with electric vehicles.

Recently, IndiGo published its first ESG Report IndiGoGreen providing the company's outlook towards good governance and an overview of the environmental and social performance.

The airline has a fleet of more than 275 aircraft.