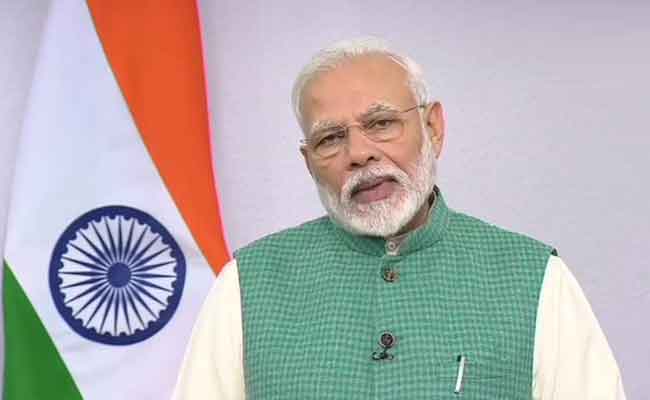 New Delhi: Prime Minister Narendra Modi on Sunday announced that seven women achievers will share their lives’ journeys and interact with the people through his social media accounts on the occasion of International Women’s Day.

“Greetings on the International Women’s Day! We salute the spirit and accomplishments of our ‘Nari Shakti’. As I’d said a few days ago, I’m signing off. Throughout the day, seven women achievers will share their life journeys and perhaps interact with you through my social media accounts,” the Prime Minister tweeted.

Greetings on International Women’s Day! We salute the spirit and accomplishments of our Nari Shakti.
As I’d said a few days ago, I’m signing off. Through the day, seven women achievers will share their life journeys and perhaps interact with you through my social media accounts.

In a series of tweets, the Prime Minister said that India had outstanding women achievers who had done great work in a wide range of sectors.

“Their struggles and aspirations motivate millions. Let us keep celebrating the achievements of such women and learning from them.”

On March 3, Modi had announced he would give his social media platforms to women to handle on Women’s Day.

In a tweet, Mohandoss said: “I feel empowered when I do what I’m passionate about! I wish to inspire my fellow citizens, especially women, to come forward and join hands with me. I urge everyone to feed at least one needy person and contribute to a hunger- free planet.”

You heard of food for thought. Now, it is time for action and a better future for our poor.

Hello, I am @snehamohandoss. Inspired by my mother, who instilled the habit of feeding the homeless, I started this initiative called Foodbank India. #SheInspiresUs pic.twitter.com/yHBb3ZaI8n

“Acceptance is the greatest reward we can give ourselves. We can’t control our lives but we surely can control our attitude towards life. At the end of the day, it is how we survive our challenges that matters the most. Know more about me and my work — @MalvikaIyer #SheInspiresUs,” she tweeted from Modi’s account.

Acceptance is the greatest reward we can give to ourselves. We can’t control our lives but we surely can control our attitude towards life. At the end of the day, it is how we survive our challenges that matters most.

Iyer survived a bomb blast when she was just 13. But that didn’t deter her from pursuing her dreams. The survivor who triumphed life’s struggles through higher education knows its importance. Calling education ‘indispensable’, she also urged to sensitise young minds so that they don’t discriminate.

Kashmiri woman Arifa Jan, who has spun a success story of her own through revival of the Valley’s Numdah handicraft, on Sunday tweeted on Prime Minister Narendra Modi’s Twitter handle to emphasise that women should focus on becoming self-reliant and also help other women.

Jan, 33, is the third woman achiever after Chennai-based social worker Sneha Mohandoss and bomb-blast survivor Malvika Iyer among the seven who will tweet — minutes after receiving the Nari Shakti Puraskar for 2019 — from Modi’s Twitter handle on Sunday to mark International Women’s Day.

I always dreamt of reviving the traditional crafts of Kashmir because this is a means to empower local women.

I saw the condition of women artisans and so I began working to revise Namda craft.

I am Arifa from Kashmir and here is my life journey. #SheInspiresUs pic.twitter.com/hT7p7p5mhg

Jan was awarded along with 15 other women by President Ram Nath Kovind.

Be a warrior but of a different kind!

Be a water warrior.

Have you ever thought about water scarcity? Each one of us can collectively act to create a water secure future for our children

Here is how I am doing my bit. @kalpana_designs pic.twitter.com/wgQLqmdEEC

A volunteer with SAHE, Society for Advancement of Huma Endeavour, Kalpana who also goes by the moniker ‘Go Green Water Champion” tweeted through the Prime Minister’s account, “Small efforts can make a big impact. Water is a valuable inheritance we got. Lets not deprive our next generations. Contribute by using water responsibly, harvesting rainwater, saving lakes, recycling used water and creating awareness.”

Vijaya Pawar on Sunday familiarised Indians with the handicrafts of the Banjara community in Maharashtra through Prime Minister Narendra Modi’s Twitter handle as the fifth woman achiever handling the Prime Minister’s account on International Women’s Day.

Working in Banjara handicraft field for the last two decades, Pawar presented the rural Gormati art of Maharashtra through the Prime Minister’s Twitter handle and showcased through a video how she encouraged thousands of women artisans working with 90 self-help groups (SHGs) under her guidance.

You have heard about handicrafts from different parts of India. My fellow Indians, I present to you handicrafts of the Banjara community in rural Maharashtra. I have been working on this for the last 2 decades and have been assisted by a thousand more women- Vijaya Pawar pic.twitter.com/A3X47245E3

Pawar belongs to the Banjara community. Having seen her relatives and other Banjara women in the hamlets making the traditional embroidered articles, she got an idea to sell these articles in the markets. Thus, she approached some women of the SHGs actively functioning in the Banjara hamlets of the area.

With the guidance of KVIC, currently, Vijaya is working in 99 Tandas of four Talukas (blocks) of Beed district in Maharashtra. A total of 982 women artisans, who are also members of 90 SHGs are working with her. Many of them are earning Rs 150 to Rs 225 per day which is much higher than what they were getting in wages while working as agricultural labourers.

The latest to take over Prime Minister Narendra Modi’s social media accounts is Kalaveti Devi, a lady mason. She is a driving force behind reducing open defecation in the district of Kanpur. She is responsible for building more than 4000 toilets in villages in and around Kanpur.

Her indomitable spirit did not shake despite being a single earner in the family, taking care of her elder daughter and her two grandchildren after the untimely death of her husband and son-in-law.

In an inspiring message, she urged, “So go out. If someone speaks foul of you, let them do it. If you want to achieve your goal, then do not look back.”

Bina Devi, who popularised Mushroom cultivation in Bihar’s Munger district, on Sunday suggested women specifically in rural areas across the country to go out from their homes and work to feel good.

Popular as as ‘Mushroom Mahila’, Bina Devi, expressed her experience while handling Prime Minister Narendra Modi’s Twitter handle as a seventh woman achiever. The 43-year-old mushroom grower presented an example before the country through PM’s tweet how women from her native village in Bihar’s Munger have become an example.

Referring to mushroom cultivation, she said: “Due to this farming, I got respect. I became a sarpanch. It is a pleasure for me that many women like myself are getting the opportunity to train.

“Where there is a will, there is a way. Everything can be achieved with will. My real identity began with cultivating one kilo of mushrooms under the bed. But this farming not only made me self-sufficient, but gave a new life by increasing my confidence.”

A former ‘Sarpanch’ (village head) of Dhauri Panchayat in Tetiabamber block for five years, Bina Devi, has trained farmers on mushroom and organic farming, vermin-compost production and organic insecticide preparation at home over the years. She is among the 16 women who were on Sunday conferred Nari Shakti Puraskar 2019 by President Ram Nath Kovind.

Bina Devi generated self employment among rural women and also engaged in dairy farming and goat farming. She has popularized mushroom production in five blocks and 105 neighbouring villages in Munger district, impacting 1,500 women by making them adopt mushroom farming.

She has been involved in spreading digital literacy and was awarded for training 700 women on how to use mobile by Tata Trusts. She has trained 2,500 farmers on SRI Method crop farming and supported formulation of self help group.

Living In The Dark: Several Odisha Villages Yet To Get Power Connection