Violators To Pay Rs 2,000 Fine In Delhi For Not Wearing Mask 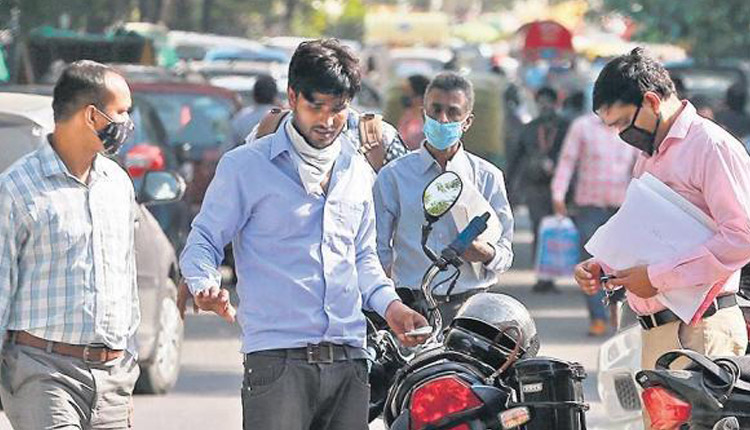 Delhi Chief Minister Arvind Kejriwal made the announcement on Thursday during a press conference held after an all-party meet at Delhi secretariat over issue to control the pandemic.

“I met the Delhi LG earlier in the day and we have decided to impose Rs 2,000 fine for not wearing masks at a public place,” Kejriwal said.

The decision came within an hour of the Delhi High Court rapping the Delhi government after being informed that only five persons had been arrested for violating Covid norms in a period of 30 days even as the cases were shooting up. “The South and West districts are the worst-hit, but the fines imposed in these areas are proportionately very small,” the court observes.

The toughening of the stance by the Kejriwal government came after the city’s Covid-19 surge worsened with 5,03,084 infection noted so far, including 7,943 deaths. The situation got alarming as the city noted the highest ever fatality in Delhi with 131 deaths in last 24 hours.

Delhi Chief Minister Arvind Kejriwal on Thursday sought support from all political parties here in the fight against Covid-19, requesting them not to do politics on the issue.

The Aam Aadmi Party (AAP) national convenor made the appeal in the over one-hour long meeting with all the party leaders at Delhi Secretariat amid rising cases of the deadly disease in the national capital. The latest data shows the overall Covid tally as 5,03,084 including 7,943 deaths.

“We have sought the cooperation of all the political parties in the all-party meeting today. This is not the right time for politics, but to do service,” Kejriwal said during a press conference after the all-party meet.

The Delhi Chief Minister further said that all parties have assured him that they would leave politics and serve the public.

Kejriwal said he has requested all the party leaders to get their workers involved in the distribution of masks at all public places. He said all the leaders were in agreement over the issue.

The Chief Minister said it was a fruitful discussion and all the politicians shared their valuable suggestions.

“All political parties supported our request to make Delhi Covid free by joining hands to safeguard all Delhiites by keeping aside their political differences.”

Meanwhile, Delhi has accounted for 22.39 per cent of COVID deaths reported across India in the last 24-hour cycle: 131 of the 585 fatalities. Maharashtra follows with a fatality count of 100.

These 131 fatalities denote Delhi’s highest daily COVID death toll so far, forcing the UT and central governments to take specific measures to tackle increasing threat posed by the deadly pandemic which so far infected 5,03,084 persons here, as per the latest official figures.

In its latest report shared on Thursday, the Ministry of Health and Family Welfare (MoHFW) revealed that 79.49 per cent of the 585 fatalities reported in the past 24 hours across India were from 10 states and Union Territories (UTs), in which Delhi tops.

Even as the Delhi government plans to reimpose certain restrictions like 50 guests at weddings and shut down specific markets that are potential hotspots to control the spread of coronavirus, 7,541 new corona cases were reported in the city after 19,085 tests.

Containment zones in the city now number 4,444, with 358 Covid-related calls received at its control room.