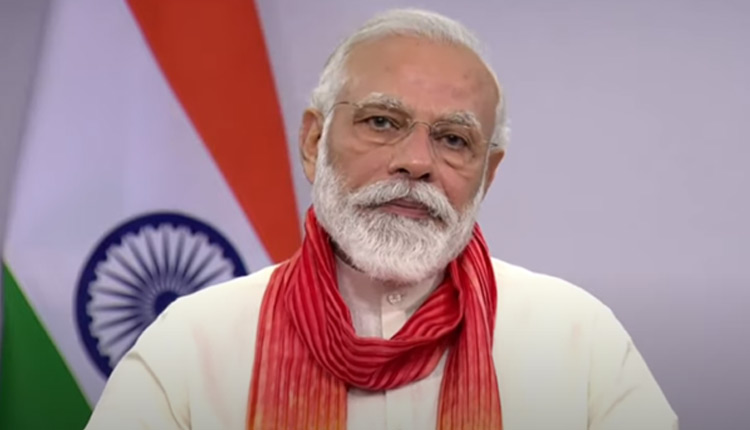 New Delhi:  In what can be seen as a subtle message in the backdrop of the recent India-China face-off in which 20 Indian soldiers were killed and reportedly a similar number, if not bigger, were on the Chinese side, Prime Minister Narendra Modi used the International Yoga Day on Sunday to send out a message.

He asserted Yoga allows “emotional stability to confidently negotiate the challenges before us”.

“Yoga enables us to stay balanced in every situation,” he said invoking Swami Vivekananda to say, “that a principled individual remains active and in complete peace even amid challenges”.

He also invoked Lord Krishna from Bhagavad Gita to suggest “Yoga is but efficiency in action”. The Gita contains a series of dialogues between Arjuna and his guide and charioteer Lord Krishna in the middle of Battlefield Kurukshetra where the “dharma yudha” or a battle between right and wrong was to begin.

Modi said: “Lord Krishna said in the Bhagavad Gita that Yoga is but efficiency in action. This mantra always teaches us that Yoga provides us strength to become more successful in life”.

Modi directly touched upon the issue of the pandemic while saying that the ancient Indian meditation system has been a source of emotional strength to many during these trying times.

“Many people all over the world infected by COVID-19 are benefitting from Yoga. They are getting the strength in fighting the disease. Yoga provides self-confidence and mental strength by which we are able to face challenges and also overcome them. Yoga provides mental peace and power to endure pain,” said Modi as he addressed the nation through a televised program.

#COVID19 attacks our respiratory system, which gets strengthened by ‘Pranayama’ or breathing exercise. People should make it a part of your daily routine: PM Modi#InternationalYogaDay #YogaDay2020

He claimed worldwide many corona infected individuals are “benefitting” from Yoga.

Highlighting India’s contribution to universal brotherhood, PM Modi remarked that “Yoga, enhances our quest for a healthier planet. It has emerged as a force for unity and deepens bonds of humanity. It does not discriminate, it goes beyond race, colour, gender, race and nation.”

Yoga enhances our quest for a healthier planet.
It has emerged as a force for unity and deepens the bonds of humanity.
It does not discriminate.
It goes beyond race, colour, gender, faith and nations.
Anybody can embrace Yoga: PM @narendramodi

However, he added, “Right eating and drinking, right play, right habits of sleeping and rising and right way of doing one’s duties – Yoga is this itself,” he summed up.

He again invoked ancient ideologies to state, “Nishkama Karma – serving everyone without any selfish motive – has also been called in our tradition as Karma Yoga. This Indian thought, embedded in our culture, has been experienced by the whole world whenever in need”.

While he advocated Indians to practice Yoga as a part of their regular lives instead of for just a day, he made the point of making India a global beacon of solidarity was unmistakable, particularly at a time when China has been increasingly facing global isolation from nations like Japan, Australia, Canada, the US and others.

Prime Minister Narendra Modi is known for using symbols, imageries and Indian epic to make his point. While he did not even passingly mention the recent stand-off between the two nuclear-armed Asian nations, the context and background of it is clear for everyone.

He was likely to be present at Leh for this year’s Yoga Day, as per the plans made before the pandemic outbreak. The Ladakh capital is the ground zero of the violent face-off in Galwan Valley where Indian and Chinese soldiers clashed on June 15 night.

This is the sixth edition of the International Yoga Day and is being observed digitally for the first time due to the coronavirus pandemic. This year’s theme is “Yoga at Home and Yoga with Family”.

On December 11, 2014, the United Nations General Assembly had declared June 21 as International Day of Yoga’, months after Prime Minister Narendra Modi had proposed the idea.