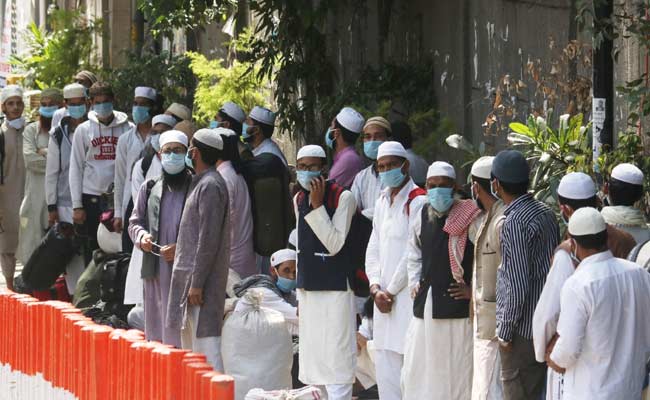 New Delhi: Delhi Police on Tuesday registered an FIR against the management of Tablighi Jamaat Markaz headquartered in south Delhi’s Nizamuddin area. An FIR has been registered against TJ for violating the Epidemic Act provisions and also IPC Section 120B (criminal conspiracy) while the case has been handed over to the Crime Branch for probe, top police sources said.

“We have to look into several aspects, such as after March 18, how many people reached the Jamaat headquarters,” said a senior Crime Branch official.

“We’ll also ascertain if the local police station and the Special Branch of Delhi Police are right in their respective position vis-à-vis acting on government orders to enforce ‘Janata curfew’ and later the countrywide lockdown.

The Special Branch is responsible for collecting daily information on all the invitees, especially the foreign participants, to the religious congregation. The local police station is supposed to monitor if the congregation followed all government orders. The Crime Branch will also question the Markaz chief as well as Saad Kandhalvi, who organized such a large crowd of the sect’s followers in a situation where coronavirus infection spreads quickly.

Crime Branch sources said, it would now look for those who participated in the event and then dispersed to various parts of the country, many among them carrying the deadly corona infection. Many states have already reported that such religious followers have already been found corona-positive.

The Union Ministry of Home Affairs (MHA) had shared details of foreign and Indian Tabhlig Jamaat (TJ) workers in India with all States on March 21, 2020, soon after COVID-19 positive cases among these workers surfaced in Telangana. The ministry took such action in order to identify, isolate and quarantine the TJ workers who might be COVID-19 positive. MHA also issued instructions to Chief Secretaries and DGsP of all States as well as CP, Delhi. The advisories were reiterated by the DIB to all State DGsP on March 28 and 29.

Meanwhile, the Telangana government has initiated damage control measures after it emerged that the major transmission of COVID-19 cases in the state took place through the people who had attended the Tablighi Jamaat religious congregation in Delhi two weeks ago. While around 600 individuals have been located in Hyderabad city itself, the government is finding it difficult to trace many people due to incomplete addresses.

Telangana government has set up 200 special teams in Hyderabad to follow up with 603 persons who have been located within the purview of the Greater Hyderabad Municipal Corporation (GHMC).
The teams comprising police, municipal, medical and revenue department officials are shifting the people displaying symptoms of COVID-19. They are also ensuring that family members of the Delhi-returnees are properly quarantined at their homes.

The TJ workers residing in the Markaz in Nizamuddin, Delhi, were also persuaded for medical screening by State authorities and Police. As per reports, by March 29, as many as 162 TJ workers were medically screened and shifted to quarantine facilities. So far, 1339 workers have been shifted to Narela, Sultanpuri and Bakkarwala quarantine facilities as well as to LNJP, RGSS, GTB, DDU Hospitals and AllMS, Jhajjar while others are being currently medically screened for COVID-19 infections.

Earlier, MHA had issued guidelines that none of the foreign nationals visiting India as a part of Tabligh team, who come on the strength of tourist visa, should get indulged in missionary work on tourist visa. However, the guidelines were violated.

The government on Tuesday has decided not to issue a tourist visa to any foreigner who wish to visit India and take part in Tablighi activities. Furthermore, State Police will examine the categories of visas of all these foreign TJ workers and take necessary action in case of violation of visa conditions.

The Ministry of External Affairs has been advised that missions may be requested to refrain from granting tourist visas to such a foreigner who is likely to use it for Tablighi activities, a home ministry official said.

The home ministry told the MEA that it should ensure that details regarding the place of stay and return ticket, as well as financial means to defray expenses in India by such visa applicants, must be examined carefully before granting them tourist visas.

Besides, it would also list out foreigners who might have already left for their countries.
The South Delhi Municipal Corporation (SDMC) has deployed 40 Dengue Breeding Checking (DBC) and 50 sanitation workers for mass disinfection in the Nizamuddin area, here on Tuesday.

Even as the Delhi Police continued to evacuate people from the Nizamuddin Markaz, the entire area of Hazrat Nizamuddin Basti and Nizamuddin West have been sanitised.

According to the SDMC, 40 DBC workers with shoulder mounted knapsacks pumps and jetting machine have been spraying the area with disinfectant twice a day. Sanitation workers with 4 auto tippers are maintaining proper sanitation in the area.

The police cordoned off a large part of Nizamuddin West as several people showed coronavirus symptoms after taking part in the religious gathering, Delhi Health Minister Satendra Jain said. 1,033 people had been shifted out, he added.

Jain said 24 people have tested positive, 700 people who attended the congregation had been quarantined and 335 admitted to hospitals. All those who participated in the event were being screened, he added.
The police have identified over 1830 attendees of the religious congregation earlier this month.

It is pertinent to mention that, devout Muslims from across the country and also from foreign countries visit the Tabligh Jamaat Headquarter (Markaz) which is located in Nizamuddin, Delhi. The devout Muslims also move out in groups to different parts of the country for Tabligh activities which continues throughout the year.

The decision has been taken after it was found that about 2,100 foreigners have come to India since January 1 and indulged in Tablighi activities in different parts of the country. As per the latest report, the positive cases of COVID-19 infection in Tamil Nadu has increased to 127 among which 50 have a travel history to Delhi. Similarly, 15 Tablighi Jamaat activists have tested positive with the virus in Telangana.