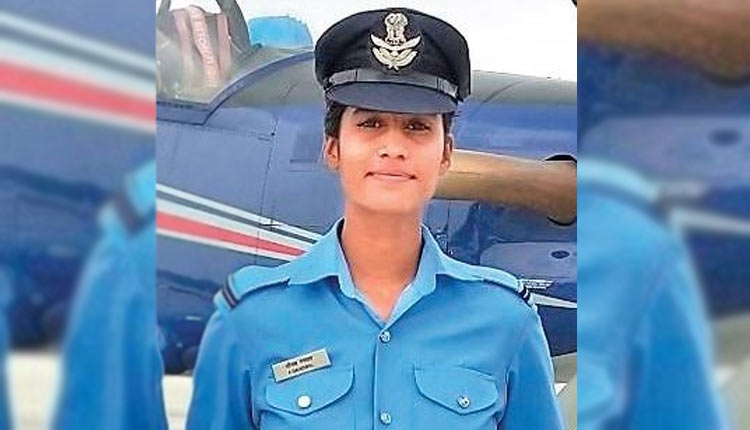 Bhopal: Obstacles cannot stop a person from realising dreams if one has the determination, and this has been proved by 24-year-old Anchal Gangwal, a tea seller’s daughter who recently joined the Indian Air Force as Flying Officer.

She was commissioned into the Indian Air Force (IAF) a few days back, but it was not an easy journey for her as sometimes her father did not even have the money to pay for her education fees.

“Her commissioning was a proud moment for our family, but we could not make it (to the Air Force Academy at Dundigal) to see her due to the coronavirus-induced restrictions,” her father Suresh Gangwal, who works as a tea seller at a bus stand in Neemuch district, told PTI.

He said his daughter dreamt of joining the IAF after seeing the bravery of its personnel in helping people during the 2013 Kedarnath tragedy.

It was not easy for Anchal and the family to make her realise this dream, but she was determined, he said.

“She was a bright student and also a basketball player. She first wished to join the Air Force after seeing the IAF personnel helping people during the Kedarnath tragedy.

And, now her dream has come true, the proud father said.

He said after getting inspired by the bravery of IAF personnel, his daughter collected information from bookstalls on how she could get into the defence force and started preparations in that direction.

“She was determined and got success in the sixth attempt, he said.

But, it has not been an easy journey for her and her father, who has been selling tea for the past 25 years in Neemuch, located around 400 km from Bhopal.

“One can understand my financial condition. At times, I faced problems in depositing her school or college fee. I had to borrow money from others on many occasions to deposit the fee. Sometimes I had to pretend to be out of town to delay fees deposition, said Suresh Gangwal, who has studied till Class 10.

Kudos to Aanchal Gangwal, a tea seller’s daughter from Neemuch district in Madhya Pradesh who got commissioned into Indian Air Force as an officer. She also topped the IAF academy and bagged the President’s Plaque. Women’s empowerment is the way forward. pic.twitter.com/DPgJGeoonm

Anchal, daughter of Suresh Gangwal, who runs a tea shop in Neemuch, will now fly the fighter plane in the Air Force. Daughter Anchal, who made Madhya Pradesh proud, will now fly in the heights of the infinite sky to protect the pride and honour of the country. Congratulations, blessings and best wishes to the daughter, Chouhan tweeted on Monday.