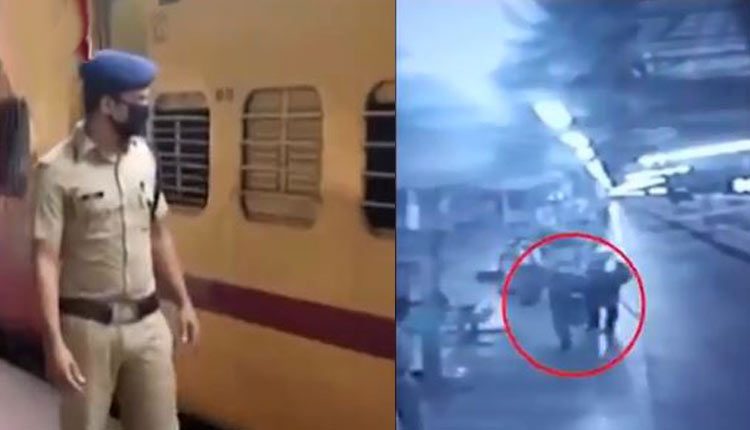 New Delhi: A Railway Protection Force (RPF) personnel showed the human face of the force, as he went beyond his duty to arrange milk for a four-month-old infant travelling in the Belgaum-Gorakhpur Shramik Special train, officials said on Thursday.

A railway ministry official here said that on May 31 at 8.45 p.m. a Shramik Special train arrived on platform number one of Bhopal station. He said, “While making rounds on the station platform, on-duty RPF Constable Inder Singh Yadav noticed one lady passenger calling him and requesting to arrange milk for her four-month-old child. And also informed him that she has been trying for milk from Belgaum, but could not get it because of which child is continuously crying for milk.”

“On the request of the lady, the RPF staff immediately rushed outside the platform and bought one milk packet. And while entering the station platform, he noticed that the train was leaving and picked up speed,” he said. “Yadav then ran and managed to hand over the milk packet to the lady passenger,” he said, adding that the lady passenger profusely thanked the RPF staff for the timely help.

A video shared by Anurag Dwary shows the relentless effort made by the RPF constable to give milk for the infant.

RPF constable posted at Bhopal station turned a savior by providing milk to a 4 month old kid travelling to Gorakhpur. Inder sprinted on the platform holding his service rifle in one hand and the milk packet delivered to Saifia @rpfcr @RailMinIndia @PiyushGoyal @ndtvindia @ndtv pic.twitter.com/OKuKtPbWop

In another video shared by Dwary, the infant’s mother, Shafiya Hashmi is seen thanking the RPF constable Inder Yadav.

Union Minister Piyush Goyal applauded the generous act of the RPF constable. He took to Twitter and penned down a few words to express his pride.

Commendable Deed by Rail Parivar: RPF Constable Inder Singh Yadav demonstrated an exemplary sense of duty when he ran behind a train to deliver milk for a 4-year-old child.

Expressing pride, I have announced a cash award to honour the Good Samaritan. pic.twitter.com/qtR3qitnfG

According to the railway ministry officials, Yadav had joined RPF in 2009 and he is presently posted at Bhopal RPF post. The railways, which suspended the passenger, mail and Express train services from March 25 has been operating the special parcel trains and freight trains to ensure the supply of essential items. The national transporter started to run the Shramik Special trains from May 1 to ferry the stranded migrant workers, students, tourists and pilgrims across the country.