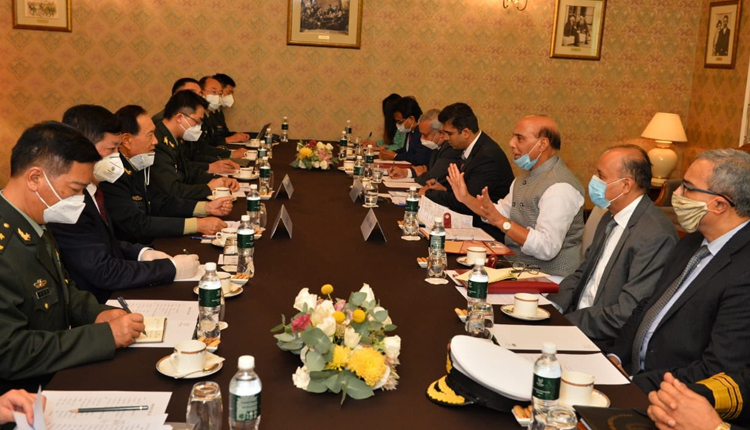 Moscow/New Delhi: Indian Defence Minister Rajanth Singh and his Chinese counterpart Wei Fenghe met in the Russian capital on Friday to discuss their border dispute and agreed to de-escalate the situation through talks.

The two-hour meeting between the Indian and Chinese delegations, which started at 9.30 p.m. Indian Standard Time,saw the border disputes discussed at length.

This is the first political dialogue after the tension on the borders started.

Both the ministers are in Moscow to participate in a joint meeting of Defence Ministers of the Shanghai Cooperation Organisation (SCO), Collective Security Treaty Organisation (CSTO) and Commonwealth of Independent States (CIS) countries.

Rajnath Singh, who is accompanied by a high-level delegation including the Defence Secretary and other senior officials, had, earlier in the day, addressed the joint meeting where he stated that India is committed to the evolution of a global security architecture which will be open, transparent, inclusive, rules-based and anchored in international laws.

India and China are engaged in four-month-long standoff at the Line of Actual Control in eastern Ladakh. Despite several levels of dialogue, there has not been any breakthrough to the resolve the deadlock, while Chinese’s People Liberation Army (PLA) troops had made fresh attempts at incursion attempts into Indian territory late last month.

China had made provocative military movements to change the status quo at Pangong Tso lake after Indian soldiers had earlier occupied the heights there to thwart the PLA’s land-grabbing bid.

Chinese aggression started increasing along the Line of Actual Control and more particularly in Galwan Valley since May 5. The Chinese side transgressed in the areas of Kugrang Nala, Gogra and north bank of Pangong lake on May 17 and May 18.