Priests Walk Over Women To ‘Bless Them With Children’, Watch Bizarre Ritual In Chhattisgarh 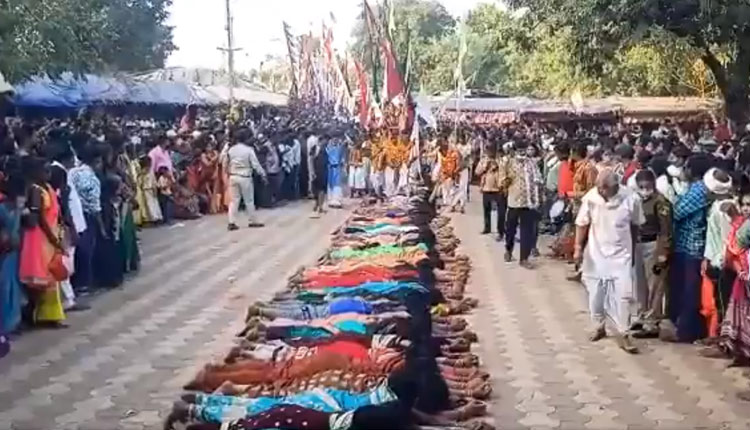 Chhattisgarh: At times, blind faith in superstitious practices contradict modern science so much so that logical theories developed to counter prevailing false beliefs and generate a scientific curiosity among people go for a complete toss. Uncanny as it may sound, last Saturday at the Dhamtari district in Chhattisgarh hundreds of married women yearning to conceive allowed priests and witchdoctors to walk over them so that they get blessed with a child.

Even though this startling ritual has no scientific evidence as yet, locals have held on to this belief for decades instead of preferring easier methods of conception, sources said.

Every year, thousands of tribal people from neighbouring areas visit the temple of Goddess Angaarmoti in Dhamtari to participate and witness the ‘Madhai fair’, organised on the first Friday post Diwali. This year too, the fest witnessed a huge gathering despite Covid-induced restrictions in place in the State.

A report of the TOI mentioned that more than 200 married women (mostly belonging to the tribal community) from around 52 villages laid down on their stomach and a dozen priests and baigas (witchdoctors) carrying huge flags walked over the back of these women to enter the temple, as part of the rituals held on November 20. What’s more surprising is that even in case anyone sustains an injury during the process, all stay mum.

Chhattisgarh: In a bizarre ritual in Dhamtari district, large number of married women desiring to have a child laid down on floor to allow priests and ‘baigas’ (witch doctors) to walk over their backs, believing that the this act will bless them with children. pic.twitter.com/YHFvtJ0Eek

Chairperson of Chhattisgarh state commission for women, Kiranmayee Nayak opined she doesn’t endorse such acts and that it’s extremely hazardous for the health of women, and said men walking over them could lead to injuries in their vital organs. “This calls for awareness and I would visit the place with my team and initiate with the help of locals to discourage the practice and make women aware about best ways of easy conception and seeking blessing from Goddess. We will ensure that their religious sentiments shouldn’t be hurt,” reported TOI quoting Nayak.

Dr Dinesh Mishra, chairperson of Andhshraddha Nirmulan Samiti said that these kinds of practices should not be encouraged and police, as well as the administration, should intervene to prevent such ill beliefs. “If rural women are facing issues with conception, a health camp should be set up to educate them about the existing medical solutions,” Dr Mishra said to TOI.