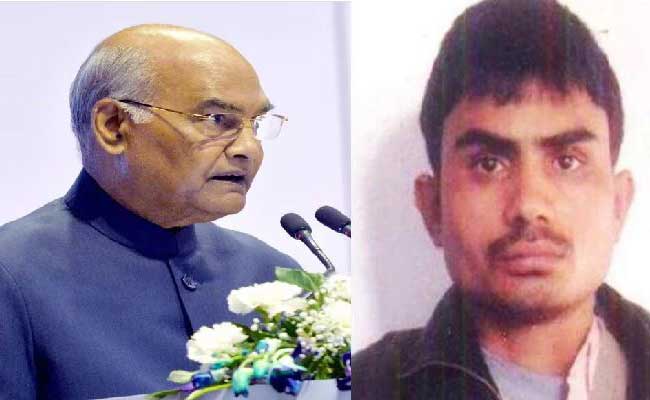 New Delhi: President Ram Nath Kovind on Wednesday rejected the mercy petition of Nirbhaya convict Akshay Kumar Singh, one of the four convicts in the Nirbhay geang-rape and murder case who have been given death sentence. Akshay had filed the mercy plea last week.

The four convicts were to be hanged on February 1, but a Delhi court had postponed the hangings on leag grounds.

Meanwhile, the Delhi High Court on Wednesday, while disposing of the Centre’s plea in the case, noted that “the convicts cannot be executed separately.”

Justice Suresh Kumar Kait observed, “Since their fates have been decided by a common order by the top court, I am of the considered view that death warrants of all the convicts be executed together and not separately.”

He further said, “It cannot be disputed that the convicts have adopted all the delay tactics to frustrate the warrants. One of the convicts, Pawan Gupta, has not filed curative petition and mercy plea after a review petition filed by him was dismissed by the Supreme Court on July 9, 2018.

“Therefore, in the interest of justice, I hereby direct the convicts to take steps if they wish to make any type of petition before any institutions/authorities available under law within one week from today, failing which this court expects from the institutions/authorities concerned to deal, as per the law applicable on delay, if any, without further delay.”

The court’s order came on a plea filed by the Centre challenging a trial court order which stayed the death warrants issued against the four convicts.

Solicitor General Tushar Mehta, while arguing the matter before the high court, had contended that the trial court order provided a perverse and misleading interpretation of Rule 836 of the Delhi Prison Rules.

“This error goes to the root of the issue. It deserves to be stayed. Every convict is enjoying defeating the judicial system in the country. Convicts are exploiting the process of law,” Mehta said.

“There is a deliberate, well-calculated and well-thought-out design to frustrate the process of law,” he added.

The Centre also submitted before the court that the four convicts can be hanged separately. “The execution should be one by one. The rule only says that if the application of one convict is pending, then the execution of others has to be postponed. But what does ‘application’ mean? It means an application pending before a court. A mercy plea is not an application,” Mehta had submitted.

Opposing the submissions of the Centre, senior advocate Rebecca John argued that the Central government did not have any locus standi to challenge the stay imposed on the convicts’ hanging as it was not a party to the matter in the trial court and has merely superimposed itself in it.

“From 2018 to January 2020, the Union of India was never a party to the case. It is my submission that it has superimposed itself in this matter. What is their locus standi? We do not know,” she submitted.

On the demand for piece-meal execution of those convicts who have exhausted their legal options, John said, “One common order was passed for all the convicts. The question is can execution take place one by one? When sentencing is common, order is common, then how can this happen?”

She said that her client is entitled to avail all the remedies under the shadow of Article 21 of the Constitution, which reads: “No person shall be deprived of his life or personal liberty except according to a procedure established by law.”

Two of the other convicts, Mukesh and Vinay, have exhausted their legal remedies. Pawan has not yet filed a mercy petition, which is his last Constitutional resort. He has also not availed the remedy of curative petition, which is the last judicial resort.