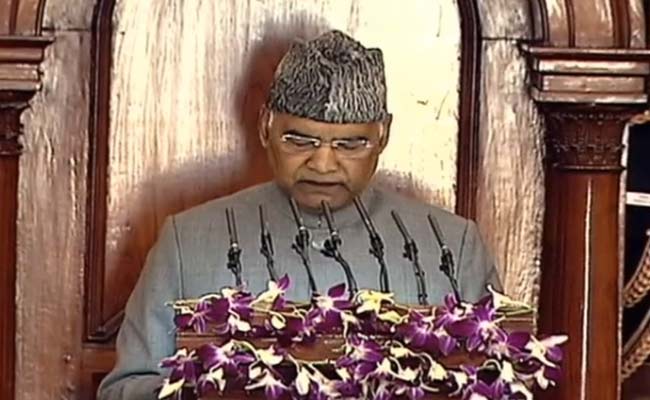 New Delhi: President Ram Nath Kovind on Friday hailed the contentious Citizenship Amendment Act as “historic” in his address to the joint sitting of both houses of Parliament, prompting protests by some opposition members.

He also said that debate and discussion on any issue strengthen democracy while violence during protests weaken it.

“The Citizenship Amendment Act is a historic law. It has fulfilled wishes of the Father of the Nation Mahatma Gandhi,” he said.

As soon as the president made these remarks, some opposition members shouted “shame, shame” slogans and also displayed banners.

Kovind also made it clear that the procedure to grant citizenship to people of all religions and those who have faith in India and keen to take Indian citizenship remains as it was.

“Debate and discussions strengthen democracy but violence during protests weaken democracy,” he said without directly referring to the anti-CAA protests in the country some of which have witnessed violence.

In a reference to abrogation of Article 370, Kovind said there is happiness among people of India that people in Jammu and Kashmir and Ladakh have got rights on par with the rest of the country.

The President said Parliament has created a record in the first seven months of the new government headed by Narendra Modi by enacting several landmark legislations.

“My government is taking strong steps for making this decade as India’s decade and this century as India’s century,” he said.

Kovind also condemned the atrocities against minorities in Pakistan and urged the international community to take necessary action.

The President said the creation of the post of Chief of Defence Staff and the Department of Military Affairs will bring synergy among three services of the armed forces and speed up their modernisation.

On steps to tackle terrorism, he said the Modi government has given a free hand to security forces to curb the menace.

Kovind also said the government was working for the security of women and will set up over 1000 fast track courts to dispose of cases of crime against women.

Ajay Devgn On How Filmmaking Has Changed Over The Years