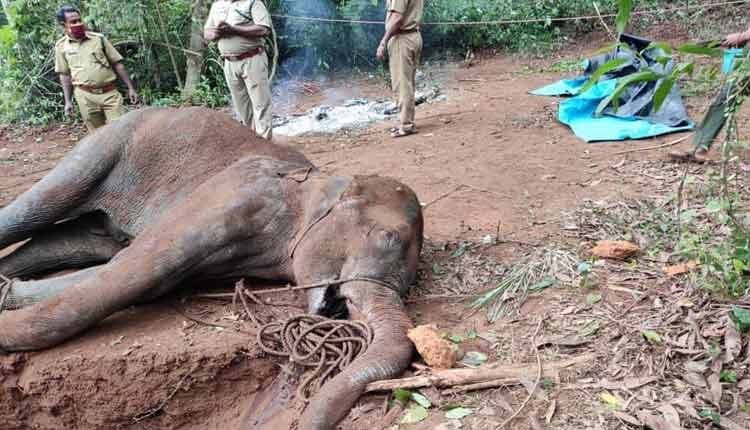 Kochi: A pregnant wild elephant in Kerala’s Silent Valley Forest fell victim to an act of human cruelty after a pineapple filled with powerful crackers offered by a man exploded in her mouth when she chomped on it, a senior forest officer said here on Tuesday.

“Her jaw was broken and she was unable to eat after she chewed the pineapple and it exploded in her mouth. It is certain that she was offered the pineapple filled with crackers to eliminate her,” Principal Chief Conservator of Forests (Wildlife) and Chief Wildlife Warden Surendrakumar told PTI. The incident was reported from the fringe areas of the Silent Valley in Attappadi.

Surendra Kumar said the elephant died at Velliyar River in Malappuram district on May 27. He said the post-mortem revealed that the pachyderm was pregnant.

“I have directed the forest officials to nab the culprit. We will punish him for ‘hunting’ the elephant,” he said.

The issue of the pachyderm’s tragic death came to light after Mohan Krishnan, a forest officer, posted an emotional note on his Facebook page, narrating the death of the elephant in the waters of the Velliyar River.

BJP MP and animal activist Maneka Gandhi expressed her dissatisfaction and slammed the Kerela government for not talking this animal cruelty seriously. She tweeted:

Mallapuram is know for its intense criminal activity specially with regards to animals. No action has ever been taken against a single poacher or wildlife killer so they keep doing it.
I can only suggest that you call/email and ask for action pic.twitter.com/ii09qmb7xW

Several Bollywood celebrities also took to social media to express shock over the inhuman killing of the elephant.

How??????
How can something like this happen???
Do people not have hearts???
My heart has shattered and broken…
The perpetrators need to be punished in the STRICTEST way. @PetaIndia @CMOKerala pic.twitter.com/697VQXYvmb

A starving,pregnant elephant trusted the hand that fed her the death of her unborn calf and her. I wish she knew better. The bigger tragedy remains that animals the world over don’t seem to give up on trusting us. Praying they learn their lessons, as I grapple for faith. #Numbed

Will this go on in the NEWWORLD post Corona??She harmed no one, damaged nothing and yet! Human beings forget humanity while this elephant suffered for no reason. This is not an isolated case & we need to put a hard stop to this ..#alllivesmatter https://t.co/cf59ddMkN2

After enduring the most inhuman act she didn’t harm a single human being or crush any home.She ran in searing pain through the village.Absolutely gutted! May her soul rest in peace & the perpetrators of this horrible crime be brought to justice immediately.https://t.co/EvVSEPZVK1

The Kerala Forest department also took to Twitter to state Article 51-A (g) of the Indian Constitution dictates that it is the duty of every citizen to be compassionate to animals.

Article 51-A (g) of the Indian Constitution says that it shall be duty of every citizen of India to have compassion for living creatures. The pregnant elephant in pic was killed in human- wildlife conflict.Action has already been initiated. But where lies our duty? N humanity?? pic.twitter.com/V1ufNt3HfN

High Drama In Hathras: Rahul Gandhi Pushed On Ground, Detained By UP Police

2 Soldiers Killed, 4 Injured In Pak Shelling Across LoC In J&K