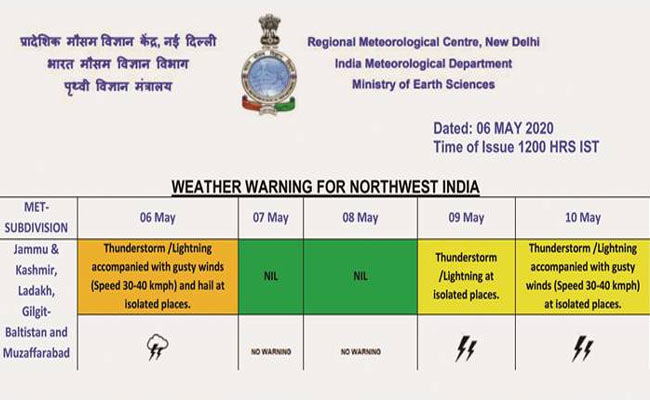 New Delhi: In a significant development, India Meteorological Department’s sub-division of Jammu and Kashmir has started including cities under Pakistan-occupied-Kashmir in its forecasts, a departure from its earlier format, officials said on Thursday.

The IMD has started including Gilgit-Baltistan and Muzaffarabad, which are parts of PoK, under the Jammu and Kashmir meteorological sub-division since May 5, said Kuldeep Srivastava, the head of the Regional Meteorological Department that gives forecast for the northwest meteorological division of the IMD.

IMD Director General Mrutyunjay Mohapatra said they have been mentioning areas under PoK under its daily weather bulletin ever since the bifurcation of Jammu and Kashmir in the two union territories August last year.

However, officials said it’s now being mentioned explicitly under the Jammu and Kashmir subdivision. These cities of PoK have now found a place in the overall forecast of the northwest division.

The development assumes significance as New Delhi has been of a position that the Pakistan-occupied-Kashmir belongs to India.

The inclusion of Muzaffarabad and Gilgit-Baltistan in the forecast comes amid Pakistan’s Supreme Court allowing elections in Gilgit-Baltistan this week. India had strongly reacted to the development.

Sources added that internally, it was pointed out that since IMD has been mentioning these cities under the PoK in its daily national weather bulletin and also the local bulletins, they should also find a place in the forecasts of the RMC.