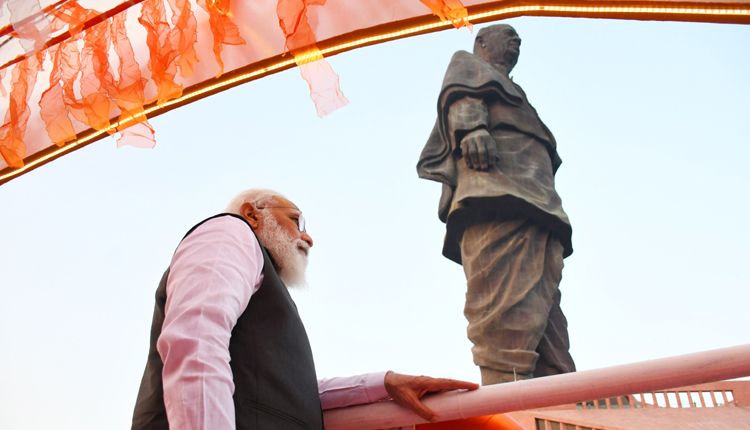 Modi, whose two-day Gujarat visit started on Friday, reached the Statue of Unity at Kevadiya in Narmada district this morning and offered flowers at the feet of the monument of Sardar Patel.

At the same time, rose petals were showered on the statue from helicopters.

Modi then headed to the parade ground and administered ‘national unity pledge’ to the gathering on this occasion.

PM Modi said that the extension of the ‘yagya’ (mission) of reclaiming our cultural heritage at Ayodhya in Uttar Pradesh this year was started by Patel by ordering the reconstruction of the Somnath temple in Gujarat.

After the recent Supreme Court judgement on the existence of the birthplace of Lord Ram at Ayodhya, a grand Ram temple is coming up there.

Modi on Saturday addressed the people from Kevadiya in Gujarat’s Narmada district on the birth anniversary of Sardar Patel, saying, “It is a wonderful coincidence that today Valmiki Jayanti is also celebrated. The cultural unity of India we see today, the India we experience today making it more vibrant and energetic owes to the efforts by Maharishi Valmiki several centuries ago.”

The Prime Minister said leaving behind the past obstacles in the development of Kashmir, the state had now moved on a new path of development after the abrogation of Article 370. Whether it is the restoration of peace in the north-east region as well as numerous steps taken for the development of the region, the country is today setting a new benchmark of unity.

Modi described the ‘Iron Man of India’ Sardar Patel as the pioneer of India’s national unity and integrity and said, “130 crore countrymen are working together to build a strong and competent nation which promotes equality for all and has immense possibilities. Only a self-reliant country can be confident of its progress as well as protect its national security. Therefore, the country now is aimed towards becoming ‘self-sufficient’ in the defence sector as well. India’s approach and attitude towards handling its border areas have also considerably changed.”

On Friday, Modi had inaugurated as many as 17 new projects, including new tourist attractions near the Statue of Unity. Some of the major attractions include Arogya Van, Ekta Mall, Children Nutrition Park, Sardar Patel Zoological Park or Jungle Safari, and a boat ride.