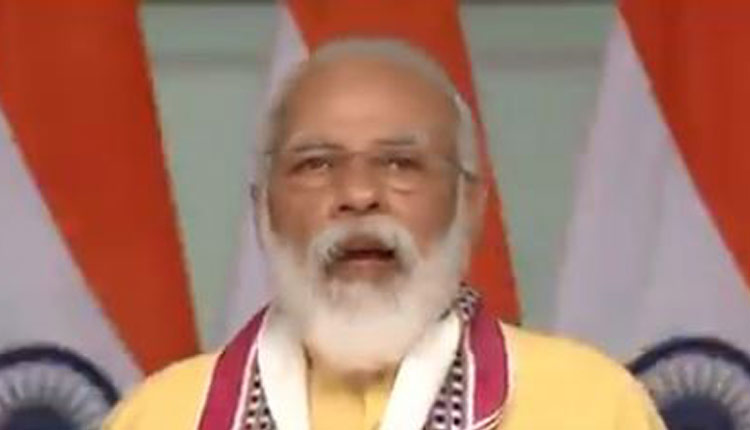 New Delhi: Prime Minister Narendra Modi seemingly took a sharp and veiled swipe at China while referring to “land grab” efforts by Pakistan during the Kargil War and its final fate. Using Sanskrit phrases, Modi in his signature style, sent out a word of caution to the dragon while talking about “backstabbing” by Pakistan.

Addressing his monthly radio program ‘Mann Ki Baat’ on the occasion of 21st anniversary of Kargil War victory, the Prime Minister was in his words. He cited a Sanskrit phrase “Bairu akaran sab kahu sau, Jo kar heet anheet tahu sau” which roughly translates into “dusht” (wicked) who thinks evil of even those who mean “good”.

This powerful assertion comes soon after Modi used the term “Bharat ki bhoomi hathyane” (land grab) by Pakistan during the Kargil War, which Modi said was an effort to “divert attention from its internal quarrels”. While the Prime Minister was hitting out at Pakistan which was met with India’s resolute force, the subtle message to China was unmissable.

Just last June, during his last Mann Ki Baat, Modi was unsparingly lethal on China when he said, “The world has seen India’s commitment to protecting its borders and sovereignty. In Ladakh, a befitting reply has been given to those coveting our territory”. That time around too, he used Sanskrit phrases like “Vidya vivaad dhanam madaya, Shakti pareshan paripeedanaya. Khalasya sadho vipareetam etat, gyaanaya, daanaya cha rakshanam” to dub China as “crooked”. Even then, Modi did not mention China but made it apparent his dig was directed at the dragon.

The reference to “land grab” in Kargil by Pakistan, and how they faced a humiliating defeat was believed to be a message for China as well, which recently indulged in border trespassing at Line of Actual Control in eastern Ladakh which was strongly thwarted by the Indian Army. Both sides faced casualties in the violent face off at the Galwan Valley.

In a significant statement, Modi said that what any Indian says has a profound effect on the morale of a soldier fighting in the hilly terrain. He also urged Indians to be mindful of that selfless soldier while indulging in “forwarded messages” which often can weaken the strong will of India’s bravehearts.

It was a clear indication to some of the conspiracy theories and alleged “surrender” barbs that few, particularly affiliated with the opposition parties have made against the government recently. The Congress has been consistent in its claim that India lost its share of land to China, an assertion that the Modi himself has categorically rubbished.