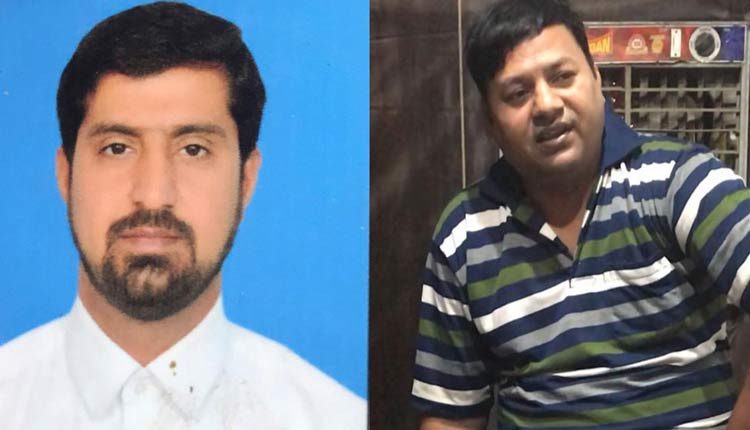 New Delhi: After two Pakistan High Commission officials who were caught spying on Sunday, an operation by Military Intelligence (MI) found that the men would visit Indian defence personnel posing as clerks of the Indian Army to gather information about troop deployment on the border.

Following their detention, both Abid Hussain Abid and Mohammad Tahir have been declared persona non grata and expelled from India.

According to top Intelligence sources, Abid and Tahir both identified themselves as clerks working with the Indian Army during their meeting with a decoy on Sunday afternoon in Delhi’s Karol Bagh area.

“They said that they were posted as clerks in the Indian Army and some times they gave their identity as working in other government offices. And they tried to gather information about the deployment of the Indian forces,” the source said.

On Sunday, the MI detained three men – identified as Abid (42), an assistant in the Pakistani mission, Tahir (44), a clerk, and Javed Hussain (36), a driver – who had been under surveillance for the past few months.

According to the Intelligence officials, they were caught red-handed while obtaining information on the Indian security establishment from a decoy.

The source said that they are being sent back to Pakistan and they will be crossing the Punjab’s Atari border on Monday evening.

An official statement of the Ministry of External Affairs (MEA) on Sunday night said that the two officials of the High Commission of Pakistan in New Delhi were apprehended for indulging in espionage activities.

Pakistan’s Charge de Affaires was issued a demarche, in which a strong protest was lodged with regard to the activities of the officials of the High Commission of Pakistan against India’s national security, the government said.

IANS has also accessed the call and audio recordings of Abid with a decoy and their meeting in the Karol Bagh area.

In the call, that was made on the decoy’s phone by Abid, the alleged Pakistani spy can be heard saying, “I have taken your number from a friend thinking that it was my friend.”

Abid further told the decoy that there was a friend with the same name and that was the reason why he asked for his number from one of the friends in the Indian Army.

Abid also informed the decoy that he has kept his family in Noida and stay there with them and not in the unit.

In the audio, Abid is also heard asking the decoy, whether he uses WhatsApp, to which he replied that they are not allowed to use the WhatsApp.

Abid then interferes with him and said that there are no such rules and “we use it (WhatsApp)”. “Maybe you are new that is the reason why,” Abid told the decoy.

Abid also asked the decoy to save his mobile number.

In the 22-minute audio clip recorded during the meeting of the spy with the decoy, which has been accessed by IANS, the two spies can be heard asking the decoy if he shall eat anything in a restaurant.

The decoy of the Military intelligence said that now those (troops) who have gone on leave, will not come.

Abid then asks the decoy to sit with them in the canteen for the talk. The decoy can also be heard saying that the troopers who have gone back to their homes have exhausted their leaves.

Then one of the spies also told the decoy that during the nationwide lockdown their company in the BRT were also not allowed to go for seven-day exercise. However, they were sent back later.

One of the spies told the decoy that he shall brief him about the work. “If you understand the work, then say ok,” he is heard saying in the audio clip.

The decoy then tells the spies that the condition (Covid-19 pandemic) is not much worse as what has been said. “Is anyone giving a clear picture of how many people have died. News channels say a lot of things,” the Pakistani spy asks the decoy.

The spy then once again asks the decoy, how did he manage to come out of his unit. The decoy replies to the spy that he came out after informing that he was going to “market”.

The spies can be heard saying in the audio clip that it is very tough to go out of the unit these days.

The decoy then says that earlier those who went back to their house, the unit asked them to report to work. “And our leaves were also cancelled,” he told the spies.

However, 10 minutes later the team of the MI, assisted ny the Delhi Police Special Cell and the Intelligence Bureau detained the two spies.

According to intelligence sources, out of the two, Hussain (42), working as an assistant in the Department of Trade in Pakistan High Commission, was an operative of Pakistan’s spy agency, ISI and is from Punjab province of Pakistan.

While indulging in espionage activities, he told Indian defence personnel that he was from Amritsar.

His colleague, an upper-division clerk in the high commission, Tahir (44), who is from Islamabad, would accompany him on the espionage missions.

The two officials had been on the radar of the Indian agencies for their suspicious activities including attempts to contact and lure service personnel for espionage, a source said.

The source further said that the MI’s operation to bust the espionage racket was going on for the last five to six months. “But the lockdown delayed the operation as there was a complete ban on the movement of the troops from their unit,” he added.

The source further said that as per the secret plans of the ISI, they started to work with the Pakistan High Commission since 2013, while one got posted as the driver.

They were also paid hefty amount every month for the espionage, the source said.

The source said that the job of the two spies was to collect information related to the Indian Military deployment on the borders with Pakistan, the details of the armoury and other classified information.

He also said that both the Pakistani spies were having good contacts with the people posted in the lower grades in the Army and have made familiar relations with many of them.