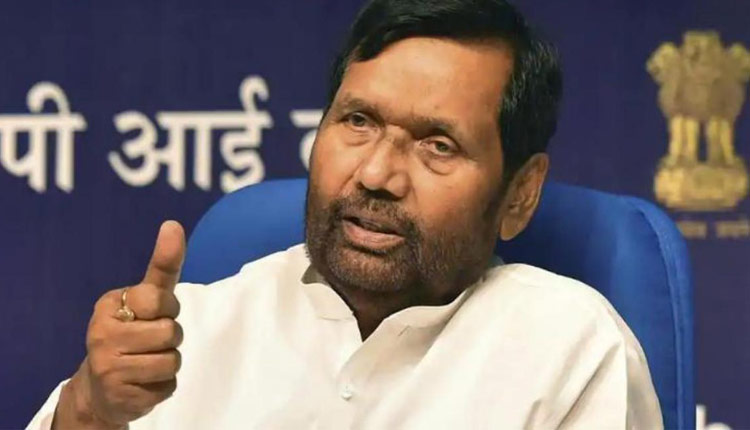 New Delhi: Union Minister for Consumer Affairs, Food and Public Distribution Ram Vilas Paswan has reiterated that ‘One Nation, One Ration Card’ (ONORC) scheme would likely start working across India by January next year, ahead of its March 31 deadline.

Paswan on Thursday said the ministry is trying to include all remaining States/UTs onboard of ONORC by January 2021. He said that earlier many States/UTs highlighted the challenges related to slow network connectivity.

In this regard, he informed that he has taken up the issue with the Department of Telecommunications (DoT) and there is a proposal to provide a free net connection to every gram panchayat for a one-year duration.

While interacting with reporters through video conferencing, the Minister said the balanced quantity of foodgrains and whole chana under the ‘Atma Nirbhar Bharat Abhiyan‘ scheme will now be distributed till August 31, 2020.

He welcomed the decision of Prime Minister Narendra Modi for the extension of Pradhan Mantri Garib Kalyan Ann Yojana (PMGKAY) for five more months till November 2020.

Paswan said the Prime Minister started the two biggest food grains distribution scheme-PMGKAY and ANBA for poor and needy persons so that no one sleeps hungry at the time of COVID-19 pandemic.

He said the identification process of genuine beneficiaries for ANBA took some time, therefore, distribution period of the balance of already lifted 6.39 LMT food grains with the states/UTs has been extended till August 31.

Paswan said that now States/UTs can complete distribution of the balance of allocated free food grains and whole gram under ANB by August.

Under the Atma Nirbhar Bharat Package, 5kg of free food grains per person and 1 kg of a free whole gram per family has been distributed to migrant labourers, stranded and needy families, who are not covered under NFSA or State scheme PDS cards.

The Minister informed that the allocation order for PMGKAY-2 has already been issued to all States/UTs and FCI on July 8, 2020, for distribution of additional 5 Kg food grains (rice/wheat)/per person/month during July-November to all 80.43 crores NFSA beneficiaries(9.26 crore AAY persons and 71.17 core PHH persons; including those covered under DBT Cash Transfer in Chandigarh, Puducherry and Dadra & Nagar Haveli).

A total of 203 LMT food grains will be distributed among 81 crore beneficiaries.