No Respite From Rain In Hyderabad 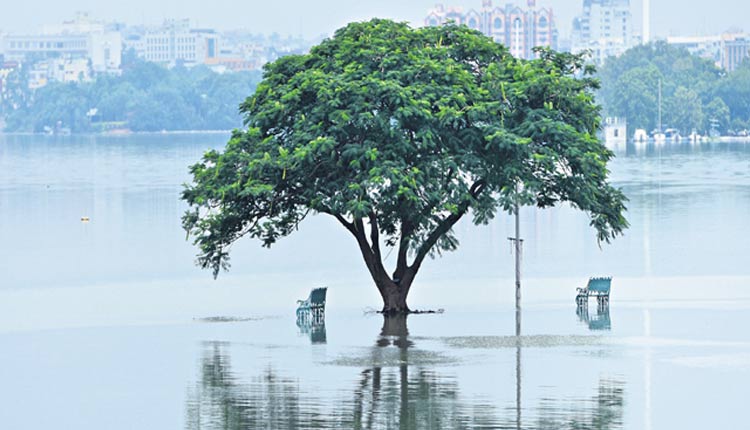 Hyderabad: Signalling no respite even before Hyderabad could recover from the recent deluge, heavy rains pounded the city yet again on Saturday.

Saturday’s rain damaged Falaknuma bridge in the city which leads to Mehboobnagar, forcing officials to shut that road.

Because of Saturday’s rains and the lingering effects of the recent downpour, traffic stalled at several places in the city, compelling many people to look for alternative routes.

Heavy traffic jams was seen at LB, Nagar, Nagole and Dilsukhnagar because of the downpour. There was an 11 km long traffic jam from outer ring road to LB Nagar.

Floodwaters were seen gushing through the roads in Tolichowki and several other locales in the city. Most roads were seen with floodwaters gushing at high speed.

Officials advised people to stay at home as the rain has flooded many parts of the city. In case of danger, people have been advised to call 100.

Meanwhile, the Met department forecast thundershowers at most places in Telangana over the next four days, accompanied by lightning.

Heavy rain is very likely to occur at isolated places in Telangana districts on Monday.

“Heavy to very heavy rain is likely to occur at isolated places in south Telangana districts,” said a Met official about Tuesday.

Telangana Director General of Police (DGP) Mahender Reddy alerted all the policemen to monitoring the situation in their respective jurisdictions, considering the Met department forecasting rains over the next five days.

“Keep monitoring the situation in your areasaflashfloods may trap people in low lying areas. Brief your staff to act accordingly and see that no inconvenience is caused to the citizens,” said Reddy.