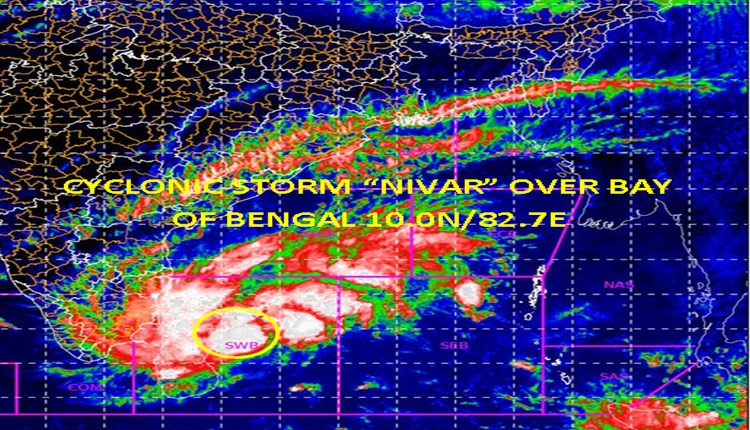 Bhubaneswar: Cyclone ‘Nivar’ is expected to cross the Tamil Nadu-Puducherry coasts between Karaikal and Mamallapuram as a very severe cyclonic storm on November 25, said India Meteorological Department (IMD) on Tuesday.

As per the latest IMD bulletin, Cyclone Nivar will make a landfall on Wednesday between Karaikal and Mamallapuram as a very severe cyclonic storm with wind speed reaching up to 120-130 Kph and gusting up to 145 Kph.

IMD DG Mrutyunjay Mohapatra said, “Extremely heavy rainfall is expected in coastal and north interior districts of Tamil Nadu on November 25. The most vulnerable zone are the districts in north Tamil Nadu.”

Though there is no direct impact of the cyclone on Odisha, heavy rain is expected over parts of coastal Andhra Pradesh and Rayalaseema under the influence of the cyclone in the neighbouring states.

1) Cyclone “NIVAR” to cross Tamilnadu-Puducherry coasts between Karaikal and Mamallapuram as a very severe cyclonic storm during late evening of 25th November.
2)Depression over Gulf of Aden and adjoining Somalia weakened into a well marked low pressure area. pic.twitter.com/ZWzqjnbDUB

Modi assured all possible support from the Centre to both the States which will face the wrath of the cyclone.

Spoke to Tamil Nadu CM Shri @EPSTamilNadu and Puducherry CM Shri @VNarayanasami regarding the situation in the wake of Cyclone Nivar. Assured all possible support from the Centre. I pray for the safety and well-being of those living in the affected areas.

The Tamil Nadu and Puducherry Naval Area carried out preparatory activities to combat the effects of Cyclone Nivar. As part of the preparedness, five flood relief teams and one diving team has been kept ready for deployment at Chennai.

While 22 teams are available on the ground, 8 teams have been kept on standby to meet any exigencies arising out of the cyclone, said Pradhan.