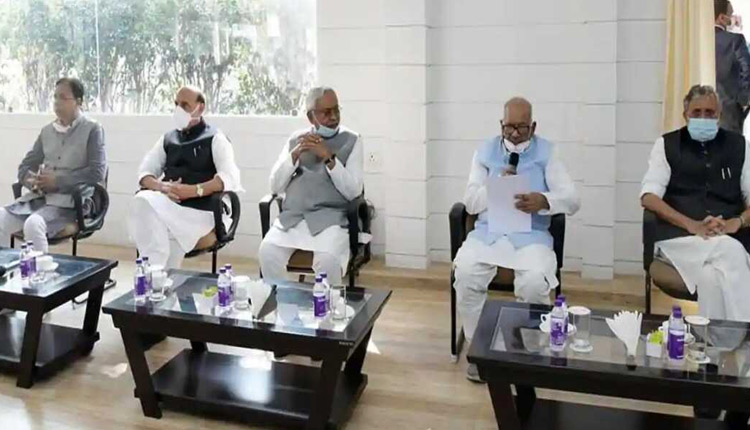 The ceremony will be attended by the top BJP leaders including Union Home Minister Amit Shah and party president J P Nadda.

The BJP, which has clinched 31 more seats than the 43 pocketed by Kumar’s JD(U), is likely to have two deputy chief ministers on the lines of Uttar Pradesh. The names of four- time MLAs Tarkishore Prasad and Renu Devi, who were chosen the leader and the deputy leader of the BJP legislature party on Sunday, are doing the rounds for the post.

According to BJP sources, party national general secretary (organization) B L Santhosh will also be present at the ceremony.

According to a Raj Bhavan communication, Governor Phagu Chauhan will administer the oath of office and secrecy to Kumar at 4:30 pm.

Even as a Pro-Tem Speaker is to be sworn in, it is not yet clear if he or she will be from among these persons or not.

BJP workers are enthused over the visit of Shah, arguably the second most powerful man in the ruling dispensation after Prime Minister Narendra Modi, who had set the tone for election campaign much before the schedule was announced by addressing the party’s first digital rally but remained conspicuous by his absence during the electioneering.

After his electoral victories in 2010 and 2015, Kumar had taken oath at star-studded ceremonies held at the sprawling Gandhi Maidan in the presence of a large number of dignitaries and the common people.

This time, however, it is going to be a much more subdued affair on account of the COVID 19 pandemic.