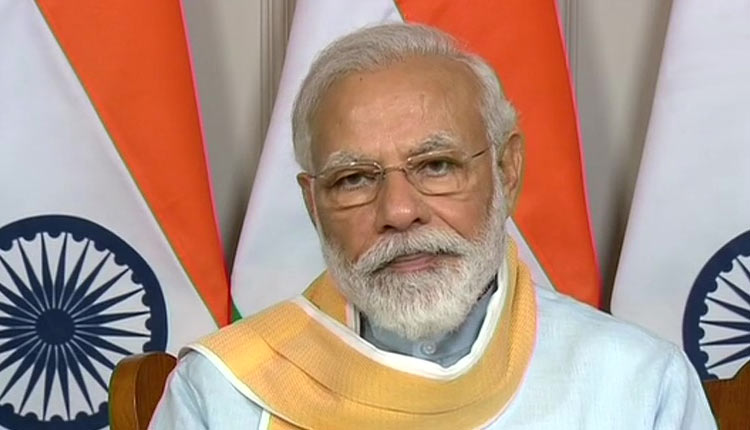 New Delhi: The media has been doing exceptional service by spreading awareness against COVID-19, Prime Minister Narendra Modi said on the occasion of National Press Day on Monday. He also added that media has acted as a valuable stakeholder in helping the government in its initiatives.

The media has been continuously adding strength to India’s democratic ethos, he added in his written message on the day, being celebrated virtually with a webinar organised by the Press Council of India.

From creating mass awareness about important issues to contributing to a behavioural change in society for the larger good, we have seen how the media as a valued stakeholder has furthered the efforts of the government and helped many initiatives like Swachh Bharat and water conservation grow into mass movements in the last few years,” he said.

In his message, read out by PCI chairperson C K Prasad, Modi said he was heartened to learn that the Council was celebrating the day. The webinar being held on the theme ‘Role of media during the COVID-19 pandemic and its impact on the media’ with participants from several other countries also reflects the “enabling power of technology , he said.

The prime minister added that at a time the world is up against an unprecedented crisis in the form of COVID-19, the nation’s fight against the pandemic is powered by the restraint and resolve of its 130 crore citizens.

In such a scenario, the media has been continuously doing exceptional service by spreading awareness against the COVID pandemic.

In a post COVID world, India is marching ahead with its resolve to build a strong and ‘Aatmanirbhar Bharat’. Media is giving our resolve the shape of a big campaign and carrying forward the message of ‘Vocal for Local’, he said.

The prime minister said the world is rapidly changing and there is need to harness India’s entrepreneurial energy, intent and talent to expand this vision across all sectors.

With digital technology showing the way, Indian media’s endeavour towards ensuring a stronger presence globally will strengthen our vibrant media landscape, he said.

Meanwhile, Union Home Minister Amit Shah greeted the media fraternity on the National Press Day, asserting that the Narendra Modi government believed in the freedom of Press and opposed attempts to “throttle” it.

Extending his greetings, Shah tweeted: “Our media fraternity is working tirelessly towards strengthening the foundations of our great nation. The Modi government is committed to the freedom of Press and strongly oppose those who throttle it.”

Greetings on #NationalPressDay. Our media fraternity is working tirelessly towards strengthening the foundations of our great nation. Modi govt is committed towards the freedom of Press and strongly oppose those who throttle it.
I applaud Media’s remarkable role during COVID-19.

Shah also lauded the efforts of the media in the fight against ongoing coronavirus pandemic, mentioning that it had played a “remarkable role”.

In a message at a webinar held by the Press Council of India on the occasion, Union Minister Prakash Javadekar reiterated that “freedom of Press is the cornerstone of our democracy”, but also stressed that it is a “responsible freedom”.

November 16 is celebrated as National Press Day since the Press Council of India was established on this day in 1966.

On the occasion of National Press Day, Vice President M Venkaiah Naidu said that any attack on the freedom of press is detrimental to national interests and should be opposed by one and all. He also said that democracy cannot survive without a free and fearless press.

Naidu made the remarks in a video message at a webinar on ‘Role of media during the COVID-19 pandemic and its impact on media” organised by the Press Council of India to mark the National Press Day.

He said press in India has always been at the vanguard of protecting and strengthening the foundations of democracy.

“A robust, free and vibrant media is as important as an independent judiciary in consolidating democracy and strengthening constitutional rule of law,” the vice president opined.

At the same time, Naidu advised the media to be fair, objective and accurate in its reporting. “Sensationalism should be avoided and the tendency to mix news with views needs to be curbed. Also, there should be greater space for development news in our reporting,” he said.

“Democracy cannot survive without a free and fearless press. Therefore, any attack on the freedom of the press is detrimental to national interests and should be opposed by one and all,” he said.

The vice president also praised print and electronic media journalists for turning into frontline warriors in the wake of COVID-19 and ensuring non-stop coverage of all the happenings, unmindful of the grave risks associated with the pandemic.

“My deepest appreciation to each and every journalist, cameraman and others, who have been striving constantly to disseminate news and information,” he said.

Naidu also stressed on the importance of conveying the right information at the right time in a pandemic, “especially when there is a plethora of fake news”.

Pointing to the need to guard against unverified and unsubstantiated claims, the vice president said media has a huge role in educating the masses in this regard.

He also conveyed his condolences to the families of the journalists who succumbed to coronavirus.

Referring to the adverse impact of COVID-19 crisis on the media industry, he said it has led some newspapers to curtail their editions and go digital.

“There have been unfortunate instances of employees being laid off in both print and electronic media,” Naidu said.

Stating that journalists should not be left “high and dry” in these difficult times, the vice president appealed to all stakeholders to come together and find innovative solutions to the extraordinary situation created by the pandemic.

Observing that the pandemic has underscored the need for media organisations to adopt flexible and resilient business models, Naidu pointed out that more and more people were staying at home and increasingly relying on the media and the entertainment industry for the latest information and to fight the isolation caused by a lack of social interactions.

Citing the huge popularity of the re-telecast of tele-serials Ramayana and Mahabharata as an example, the vice president suggested to the media industry to tap into increased audience base and explore alternative ways to improve its financial health.