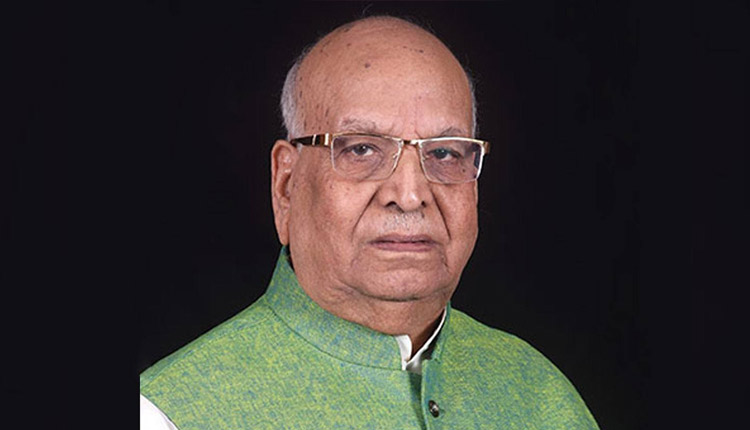 Lucknow: Madhya Pradesh Governor Lalji Tandon (85) passed away here on Tuesday after a prolonged illness. His son and UP minister Ashutosh Tandon confirmed the news.

Lalji Tandon was admitted to the Medanta hospital on June 13 after he complained of urinary problem and fever. He, thereafter, developed complications in liver and kidney and even underwent a surgical procedure.

He was put on ventilator later.

Born on April 12, 1935, Tandon is survived by his wife Krishna Tandon and three sons.

Meanwhile Tandon’s son, Ashutosh Tandon, who is a minister in the Yogi Adityanath government, said that the cremation of the late leader will take place in Lucknow on Tuesday evening.

His body will be kept at his residence on Triloki Nath Road in Hazratganj from 10 a.m. to noon and then at his Sondhi Tola residence after that.

The cremation will take place at Gulala Ghat in Chowk at 4.30 p.m.

Prime Minister Narendra Modi condoled the death of Madhya Pradesh governor and BJP veteran Lalji Tandon, saying he will be remembered for his untiring efforts to serve the society.

Tandon died at a Lucknow hospital this morning where he was admitted last month.

“Shri Lalji Tandon will be remembered for his untiring efforts to serve society. He played a key role in strengthening the BJP in Uttar Pradesh,” Modi said in a series of tweets.

Tandon made a mark as an effective administrator, always giving importance to public welfare, Modi said.

The prime minister recalled that Tandon was well-versed with constitutional matters.

“Anguished by his passing away. In this hour of grief, my condolences to the family and well-wishers of Shri Tandon. Om Shanti,” the Prime Minister said.

Shri Lalji Tandon was well-versed with constitutional matters. He enjoyed a long and close association with beloved Atal Ji.

In this hour of grief, my condolences to the family and well-wishers of Shri Tandon. Om Shanti.

“In the passing away of Madhya Pradesh Governor Shri Lal Ji Tandon, we have lost a legendary leader who combined cultural sophistication of Lucknow&acumen of a national stalwart. I deeply mourn his death. My heartfelt condolences to his family & friends,” tweeted the President.

In the passing away of Madhya Pradesh Governor Shri Lal Ji Tandon, we have lost a legendary leader who combined cultural sophistication of Lucknow and acumen of a national stalwart. I deeply mourn his death. My heartfelt condolences to his family and friends.

The state government has announced a three-day state mourning as a mark of respect to the departed leader.

In a statement, the Chief Minister said that Lucknow has lost its life and the country has lost a popular leader.

Deputy Chief Ministers Dinesh Sharma and Keshav Maurya have also condoled the passing away of Tandon and have termed it as an irreparable loss for the party.

Deeply saddened to know the passing away of Madhya Pradesh Governor and veteran leader, #LaljiTandon. My thoughts and prayers are with the bereaved family. RIP

.@PandaJay expresses profound grief and sorrow on the demise of Governor of Madhya Pradesh & veteran @BJP4India leader Shri #LaljiTandon Ji. He played a crucial in strengthening BJP in the grassroot level in Uttar Pradesh.
Condolences to the bereaved family.
Om Shanti 🙏🙏 pic.twitter.com/McQYQAsGmd

The veteran leader has served as member of the Uttar Pradesh Vidhan Parishad for two terms and also remained the Leader of House of the Council.

He was elected to the Vidhan Sabha for three terms and was a minister in BJP and BSP -BJP governments.

In 2018, he was appointed Governor of Bihar and shifted to Madhya Pradesh in the same capacity in 2019.

End Of An Era: Veteran Actor Bijay Mohanty No More