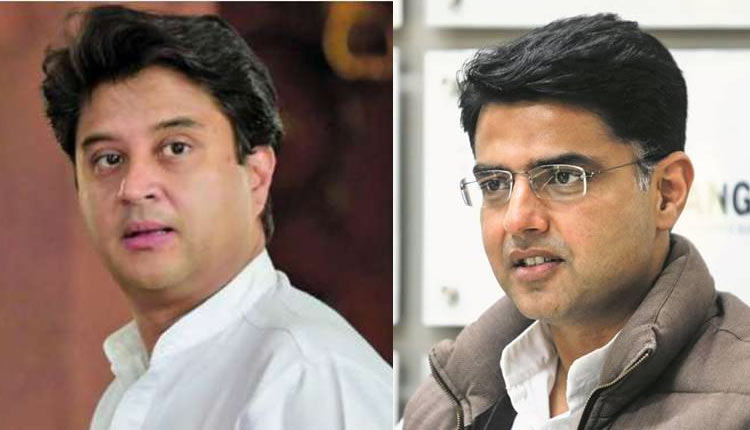 New Delhi: As Rajasthan politics heats up over Congress Deputy Chief Minister Sachin Pilot being summoned by the police of his own government, his old party colleague turned BJP leader Jyotiraditya Scindia has added to the intra-Congress tussle by saying that Pilot is being “persecuted” by Chief Minister Ashok Gehlot.

In a tweet that has intensified speculation about the BJP’s next move, Scindia said, “Sad to see my erstwhile colleague, Sachin Pilot, too being sidelined and persecuted by Rajasthan CM Ashok Gehlot. Shows that talent and capability find little credence in the Congress.”

Sad to see my erstwhile colleague, @SachinPilot too, being sidelined and persecuted by Rajasthan CM, @ashokgehlot51 . Shows that talent and capability find little credence in the @INCIndia .

Scindia, who too was kept out of power ever since the party’s victory in the 2018 Madhya Pradesh elections, recently jumped ship to the BJP along with his followers, leading to the fall of the Kamal Nath-led Congress government in the state.

Both Scindia and Pilot have worked closely in the party as junior ministers in the UPA government.

Now after Gehlot alleging that the BJP is trying to repeat a MP-like coup in Rajasthan with an upset Pilot and a slew of pro-Pilot MLAs camping in the national capital, Scindia’s tweet saying Pilot is being “persecuted” has forced the Congress to seriously work on the number games.

The Congress’ strength in the 200-member Rajasthan Assembly is 102, while its ally Rashtriya Lok Dal (RLD) has one MLA. After six Bahujan Samaj Party MLAs joined the Congress, the ruling party’s score in the House climbed up to 108. Add to that the support of 13 Independents, and 2 Bharatiya Tribal Party and two CPI-M MLAs, the party’s tally stands at 125.

Party sources said that around 20-25 MLAs could reportedly back Pilot if he leaves the party and joins the BJP. In that case, the Congress’ numbers will fall below 100, while the BJP might touch 100-figure mark.

Barely months ago, then a Congress leader, Scindia had reached the national capital after being upset with Kamal Nath for not ceding him any political ground in the state, before joining the BJP along with his followers.

Now, another upset Congress leader is camping in Delhi with his followers. Scindia’s tweet will surely give the grand old party its deja vu moment.

Amid the political crisis in Rajasthan, former Congress chief Rahul Gandhi had a conversation with Deputy Chief Minister Sachin Pilot, claimed sources in the party.

“Pilot had a conversation with former party chief Rahul Gandhi over the political crisis in the state, source claimed.

According to party sources, Deputy Chief Minister Sachin Pilot, who has been in Delhi-NCR along with over 25 MLAs, is set to arrive in the state capital.

“Pilot will attend the meeting of the party leaders in Jaipur along with the senior party leaders,” the source claimed.

The source further said that a meeting has been called by Gehlot on Monday at 10.30 a.m. which will be attended by Pilot.

The source said that former union minister Makan along with Pandey and Surjewala is set to leave for Jaipur in the night by a chartered plane.

Meanwhile, Surjewala took a swipe at the BJP and in a tweet in Hindi wrote, “Entire country is suffering from Covid-18 crisis and the fresh daily cases have crossed 29,000 mark. China has occupied our lands and the ruling party first bought our MLAs in Madhya Pradesh and now trying to lure legislators in Rajasthan. One needs to understand that crisis is not for any state but for the entire democracy.”

Earlier in the day, Pandey asserted that forces trying to destabilise the Ashok Gehlot government will not succeed and the party MLAs are intact.

In a series of tweets, Pandey said, “All the means to buy the Congress-led government in Rajasthan would not succeed. Whatever offer the BJP may make to Congress MLAs but our legislators including the independents are united.”

“And they all support the Congress-led Ashok Gehlot government in the state,” he said in another tweet.

His remarks came amid the political crisis in the state after Deputy Chief Minister Sachin Pilot went incommunicado along with over a dozen of MLAs.

Pilot, who arrived in the national capital on Saturday has also sought a meeting with party interim chief Sonia Gandhi over the issue.

According to party sources, Pilot did speak with Congress treasurer Ahmed Patel late on Saturday night but the rift between Gehlot and his deputy is deep-rooted ever since former took over as Chief Minister.

The Congress is trying to pacify both the camps in the state to save the party from another embarrassment, sources said.

The fears are whether ‘Operation Lotus’ will be successful or not in Rajasthan and will the state see a rerun of the Madhya Pradesh story?

The Gehlot camp claims that his government has the numbers and the Chief Minister has support of 103 MLAs.

Govt Should Focus On Releasing Money Directly Into Pockets Of People: Rahul Gandhi